The impeachment trial of U.S. President Donald Trump begins in full Tuesday in the U.S. Senate — only the third time in U.S. history a president faces removal from office for allegedly violating his oath.

One of the first pieces of business for the Republican-led Senate is a vote on Majority Leader Mitch McConnell's proposed timeline for the trial.

McConnell's resolution would give Democratic House impeachment managers — who will act as prosecutors — and Trump's legal team 24 hours each over two days to present their cases. The resolution says nothing about whether witnesses would be called and new evidence allowed to be introduced.

McConnell and the Republicans have made no secret of wanting the trial to be a quick as possible resulting in Trump's acquittal.

Senate Minority Leader Chuck Schumer said late Monday that a trial without new evidence, witnesses or documents "isn't a trial at all."

Lawyers: Trump did 'absolutely nothing wrong'

Trump's lawyers are assailing the impeachment case against him as a "dangerous perversion of the Constitution," asserting he did "absolutely nothing wrong" in pressing Ukraine to launch investigations to benefit himself politically.

The lawyers say Democrats pushing for Trump's removal are not trying to find the truth about Trump's Ukraine-related actions, but are looking to overturn his 2016 election and interfere with his 2020 re-election campaign.

The House of Representatives impeached Trump on two articles. One alleges he abused the presidency by pressing Ukrainian President Volodymyr Zelenskiy to investigate one of Trump's top 2020 election challengers, former Vice President Joe Biden. The second charge is allegedly obstructing Congress in its investigation.

Democratic lawmakers had earlier said it was clear that the "evidence overwhelmingly establishes" that Trump is guilty of both charges. 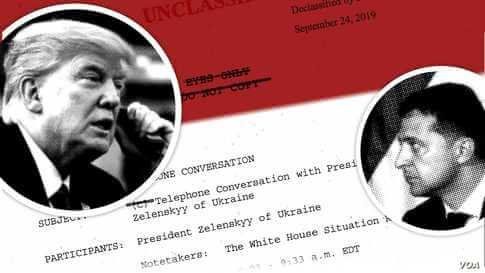 Key Events in the Impeachment Inquiry

The Trump lawyers, in their 110-page filing, said that president was conducting normal foreign policy affairs in dealing with Zelenskiy.

They said he did not commit a crime, even though conviction of an impeached U.S. president and removal from office does not depend on a specific violation of a criminal law. Rather, it is how the 100 members of the Senate, acting as jurors, interpret the standard for conviction set out in the U.S. Constitution, whether a president has committed "high crimes and misdemeanors."

No matter the legal arguments for and against Trump, he almost certainly will be acquitted by the Republican-majority Senate, where a two-thirds vote against him would be required for a conviction and removal from office.

At least 20 of the 53 Senate Republicans would have to join all 47 Democrats to convict Trump, and no Republican has called for his ouster.

The White House predicts Trump's acquittal within two weeks. But the trial could last much longer if Democrats succeed in persuading four Republicans to join them in calling for testimony from key Trump aides about the president's Ukraine-related actions.

Democrats want to hear testimony from former national security adviser John Bolton, acting White House chief of staff Mick Mulvaney, and others about how Trump asked for investigations of Biden, his son Hunter Biden's work for a Ukrainian natural gas company, and a debunked conspiracy theory that Ukraine meddled in the 2016 election on behalf of Democrats. Trump's Ukraine efforts came at the same time he was temporarily withholding $391 million in military aid that Ukraine wanted to help fight pro-Russian separatists in eastern Ukraine.

Trump has said he wants to call the Bidens as witnesses at his trial, along with the still-unidentified whistleblower who first disclosed that Trump in a July phone call asked Zelenskiy to launch the Biden investigations. But on Twitter Monday, he seemed averse to hearing testimony from Bolton, whom he ousted in September.

Democrats, Trump said, "didn’t want John Bolton and others in the House" to testify. "They were in too much of a rush. Now they want them all in the Senate. Not supposed to be that way!"

House Democrats had sought testimony from Bolton and others in Trump's orbit. But the potential witnesses complied with the president's edict to not cooperate with their investigation, although others ignored it and testified. Democratic lawmakers abandoned efforts to subpoena some witnesses out of fear that the legal fights over their testimony would extend for months and instead moved ahead to adopt the impeachment articles without hearing them testify under oath.

Bolton now says he is willing to testify at Trump's impeachment trial if he is subpoenaed by the Senate.

Trump, who almost daily ridicules the impeachment effort, tweeted Monday, "Cryin’ Chuck Schumer is now asking for 'fairness', when he and the Democrat House members worked together to make sure I got ZERO fairness in the House. So, what else is new?"

Two other presidents — Andrew Johnson in 1868 and Bill Clinton in 1998 were impeached by the House but acquitted in Senate trials and remained in office.

U.S. President Richard Nixon faced almost certain impeachment in 1974 in the Watergate political scandal, but resigned before the House acted.

Are Democrats Pushing America To The Breaking Point?Next PostBuckle Up: What to Watch as Impeachment Trial Takes Off