On September 1st, in front of Independence Hall, where brave, brilliant men signed the Declaration of Independence, standing up to the bully King George III and denouncing England’s oppressive government rule over the colonies, The Great Dictator, Joe Biden, spoke to his comrades.  For the other 75 million Americans, we were unmistakably told that we are a threat to democracy, “an extremism that threatens the very foundations of our republic.”

Trying to get in front of their numerous, devastating losses and failures, the regime chose to employ the tactics of socialist darling, Saul Alinsky, by projecting everything they are doing onto their political enemies, the MAGA Republicans.  The President of the United States, flanked by two uniformed Marines, bathing in blood red light, referred to these Americans as “MAGA extremists” and conveyed persistently that they are a threat to democracy.  By “democracy” Biden of course means their oppressive, unforgiving control over the republic; their “oligarchy.”

The Great Dictator seems to approve of unthreatening, establishment Republicans, which comes as no surprise but has declared war on the nearly 75 million Americans who voted for the bad, mean tweeting orange man who stands between us and them.  Boy did Trump trip a nerve with these folks.  Ever wonder what that’s really about?

The democrats are showing their cards.  They are so desperate to hold on to power that they are willing to throw away law and order, public safety, the economy, the constitution, election integrity, free speech, your way of life, and grossly abuse political power against political enemies, all to stop Trump.  It is time to ask yourself why they are so frantic and so willing to destroy the greatest constitutional federal republic on earth.  To what end and why?

El Presidente Biden said MAGA Republicans “thrive on chaos, live in darkness and lies,” “don’t respect the rule of law,” are “backward,” “flame political violence,” are “against the pursuit of justice and rule of law,” and in addition, he said they are trying to steal elections.  By attempting to remove dead people from voter rolls, trying to put a stop to ballet harvesting, and ensuring the reliability of our elections with proper oversight of the polls, state lawmakers were called “partisans and cronies.”  Man, these people are truly un-American in their pursuit of fairness and integrity.  As for his other comments, they refer unerringly to the left, whereas they are the utter opposite portrayal of “MAGA Republicans.”

Biden said he “rejects violence as a political tool.”  Well, that’s interesting.  Perhaps the conservative Supreme Court justices would be interested in hearing that.  Or maybe the numerous pregnancy centers are being vandalized and firebombed for trying to offer pregnant women much-needed support.  Or the thousands of business owners who have had their businesses looted, burned to the ground or shut down.

There are the Catholic mothers who had to endure their Sunday mass being illegally disrupted by aggressive protesters walking into their churches on Mother’s Day (oh the irony) in blood-soaked cloaks.  Then there are the numerous conservatives who have had to endure bellicose harassment while dining out with family, thanks in part, to Maxine Waters's call to arms to “create a crowd and you push back on them, and you tell them they’re not welcome anymore, anywhere.”

I think 18-year-old Cayler Ellingson’s family would like to hear how the left “rejects violence as a political tool.”  Cayler was run over by Shannon Brandt on September 18th, for being what he called a “Republican extremist.” I wonder where he adopted that language from.

Herr Biden called for MAGA Republicans to “accept the results of elections,” which is truly laugh-out-loud funny.  First, there was the election of 2000, which brought endless “illegitimate” claims, including from the current president, then the histrionics after Trump’s win in the 2016 election, which caused complete election denial chaos from suburbia to the classrooms at Yale. These knuckleheads spent four years calling Trump “illegitimate.”  Out of the mouth of the 2016 losing candidate herself, “You can run the best campaign, you can even become the nominee, and you can have the election stolen from you.”  Yeah Hillary, accept the outcome of the elections!

The democrats, in true form, seem to be planting the seed that the midterm elections might be stolen, by MAGA Republicans, engineering for themselves an “illegitimate” claim, just in case they fail to turn the tide on the red wave that’s coming.  But again, if you want to know what they are up to, look no further than what they are accusing their opponents of doing.

Darth Brandon called MAGA Republicans conspiracy theorists.  Does he mean the Trump-Russia collusion conspiracy, or Operation Crossfire Hurricane and the FBI involvement in and subsequent cover-up of all that, or the conspiracy surrounding Facebook being asked to bury the Hunter Biden laptop story to help Biden’s chances by labeling it “Russian disinformation”?

Their pathetic attempts to use their concocted crimes to impeach Trump twice begets the desperate, lackluster, underperforming January 6th hearings and have caused the Democrats to become unhinged enough to throw a Hail Mary Mar-A-Lago raid pass to keep Trump as far away as possible from running again.  When that backfired, Il Duce opted for a wretched speech besmirching half of the country, declaring that MAGA Republicans see “carnage, despair, and darkness” and spread “lies and fear.”

During this venomous speech, Biden also claimed the recent, entirely partisan, Inflation Reduction Act will save the planet.  Scientists the world over have acknowledged that for every overreach environmentalists ram down our throats, destroying productivity, industry, and individual rights, it will have little to no meaningful impact on global temperatures.  Admittedly, the green energy push is about social justice, while hiking up energy costs for every single American.

Who could go for some mean tweets and $1.79 gas right now?

Events in California should tell you everything you need to know about where this political movement is headed.  24 hours after telling Californians that they will have to own an electric car within the next 10 years, they told everyone to turn up their thermostats during a heatwave due to overworking their energy grid.  How is that going to work out once everyone is plugging in their car?  Where do democrats think the energy comes from?  Try mostly fossil fuels.  Where do they think the lithium comes from that magically goes into the batteries that operate these electric vehicles?  I’ll take the toxically masculine, hardworking, adult coal miners and oil rig guys over the Democratic Republic of Congo’s 10-year-old kids, who progressives should want in school, instead of mining lithium for overprivileged, self-righteous, authoritarian liberals.

This vitriolic speech was full of every platitude known in politics.  Like a bad actor, speaking breathlessly, angrily, intently, Joe Biden played the part of sufficiently outraged, pious, American “patriot.”  Incapable of achieving these emotions organically, Biden had obviously rehearsed when to hit his marks.  Much like watching Miss Teen USA South Carolina in 2007 replace “like” with “such as” but not understanding where exactly to use “such as” in a sentence.  “I believe that our education, like, such as South Africa and Iraq, everywhere, like, such as, and.”  That could easily be Joe Biden on any good day. Biden knows not what he says, but he knows what his handlers want him to achieve.

While the dishonesty of this speech left his emotions contrived, the gaslighting did a fantastic job of placating the MSM, democrats, and Never Trumpers, yet it seems to be a desperate attempt to bait liberals into dehumanizing half of the country and for America-loving Republicans to walk into another January 6th so democrats can crush the resistance once and for all.

The only thing standing in the way of democrats taking permanent and complete control of the American government is American patriots desperately trying to defend their children, their families, the constitution, and everything upon which this country was founded.

These good people have now been called extremists and a threat to democracy by a sitting president, with two US Marines standing behind him, clearly involving them in a highly political activity, forbidden by military rules.  The president, once elected, is there to represent every single American regardless of affiliation.  That is not what Joe Biden did that Thursday night.  He declared war on 75 million Americans, which should be considered war on all Americans.

If you want to see what fascism looks like, look no further than the juxtaposition of four years of Trump versus one year and a half of Biden and the democrats in Congress to know who the fascists are.

The Biden Regime has so far played part in a politically motivated FBI raid on a former President and likely his political opponent, as well as that of a sitting member of Congress, at least a dozen Trump allies including Mike Lindell, a MAGA donor, who is now losing vendors as a result, the unconstitutional detainment of January 6th defendants, weaponization of government agencies, the tripling in size of the IRS, plus arming a good portion of them, illegal COVID related decrees, the government coordinated censorship with social media and the wokeness of the United States military.

MAGA Republicans stand for God, family, American industry first, the American worker first, border control, lower taxes, energy independence, small business, and small government.  They value with every ounce of their DNA, the purpose of the amendments in our sacred constitution.  And for that, they have been called fascists, terrorists, and anti-American threats to democracy.

Having not had a good idea in decades, democrats have focused all their energy on the suppression of their opposition.  They know they cannot beat Republicans on ideas and problem solving, so they are going to kill free speech, weaponize the government against their political enemies and dehumanize their opponents to take control for good.  This is the way of every dictatorship in history.

Will Americans defend their freedoms and their country at the ballot box this fall, or will America as we know it, be a thing you read about in the history books?

No matter what they do to me, They will never get me to stop fighting

Joe Biden has declared that half of this country are enemies of the state! 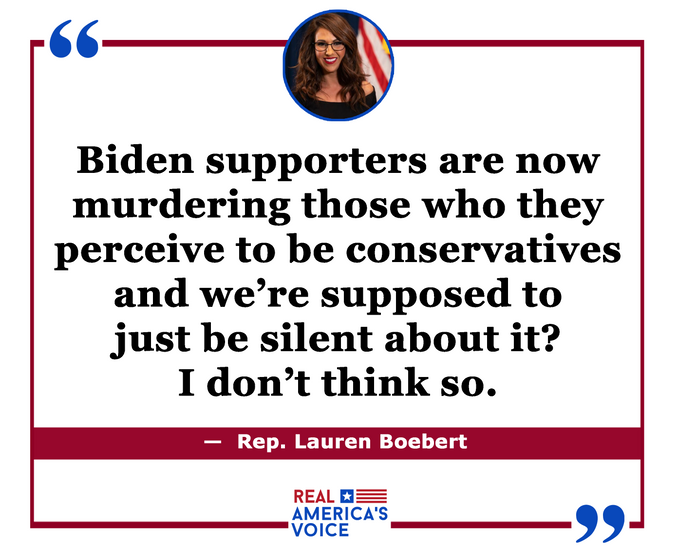