While Democrats and Republicans dominate U.S. political headlines, scores of smaller parties dot America's landscape and, at times, have a major impact on national, state and local elections.

Some of these parties echo America’s past, like the Prohibition Party, founded in 1869, which has long opposed consuming alcohol. America’s many minor leftist parties include the Socialist Party USA, founded in the 70s. More recently, the American Solidarity Party, a Catholic party advocating pro-family policies, was founded in 2011.

The 2016 elections saw several third parties attract their highest-ever presidential vote totals at a time when many Americans expressed dissatisfaction with both major party candidates. The Libertarian party, which advocates for lower spending and taxes, saw the biggest leap in support as presidential nominee Gary Johnson received 4.5 million votes, nearly triple his 2012 total.

Similarly, the environment-focused Green Party's presidential nominee, Jill Stein, received 1.5 million votes in 2016, up from a half million in 2012. Some Democrats accused Stein of siphoning votes from the party's 2016 nominee, Hillary Clinton, who lost to Donald Trump. In fact, third party vote totals in several critical battleground states exceeded Trump's margin of victory over Clinton. Stein has rejected any suggestion she cost Clinton the election, calling it a "pathetic excuse" for Democrats' poor 2016 showing.

Controversy is not new for the Greens. In 2000, Green Party presidential candidate Ralph Nader received 100,000 votes in Florida, the state that ultimately decided the presidential contest and provoked a furious legal battle that reached the Supreme Court. Nader's vote total was especially noteworthy, given that Republican George W. Bush ultimately won the state by just 537 votes over Democrat Al Gore.

While the Green Party is often seen as taking away votes from Democrats, some say the Libertarian Party saps votes from Republicans.

Like Republicans, Libertarians argue for slashing the size of government. But the Libertarian Party's trumpeting of individual freedom extends to hot-button social issues like abortion and same-sex marriage, putting them out of sync with socially conservative Republicans.

Tom Ross, a former chairman of the Delaware State Republican Party, claimed that Gary Johnson cost Trump the popular vote in 2016, asserting that 75% of Libertarian voters would otherwise have voted for Trump.

Johnson and his vice presidential running mate, Bill Weld, were both former Republican governors with high approval ratings in their respective states. Weld is currently mounting a long-shot bid challenging Trump for the Republican Party's 2020 nomination after defecting from the Libertarian Party. 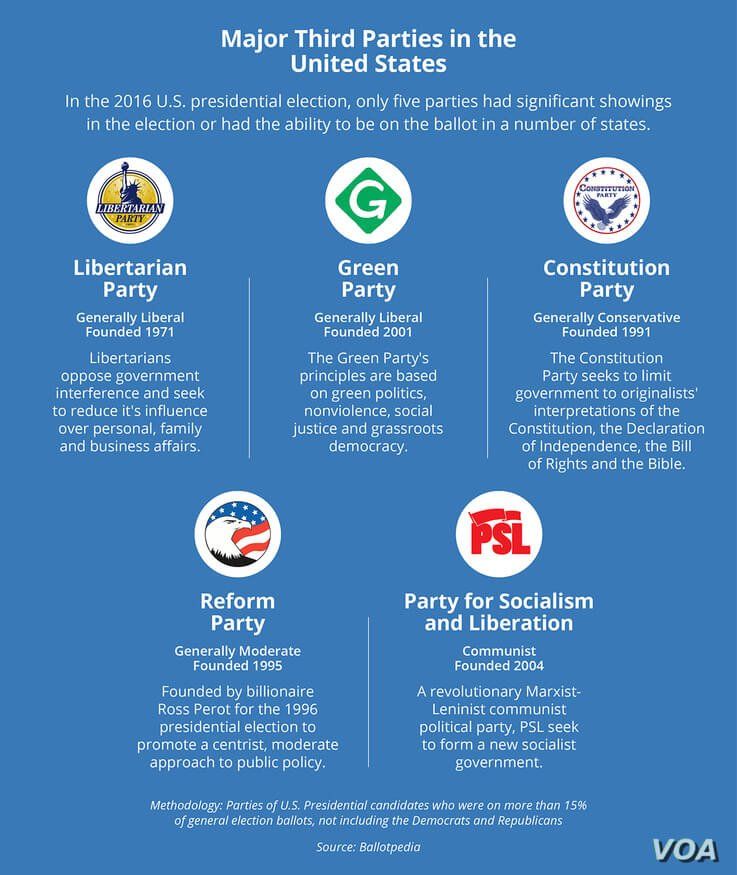 Small parties have capitalized on disaffection with the major parties. According to a 2018 Gallup Poll, 57 percent of Americans say a third party is needed because Democrats and Republicans do a “poor job.”

Earlier this month, the Libertarian Party notched victories in a string of local elections, as 21 Libertarian or Libertarian-endorsed candidates were elected to school boards, city councils, and mayorships across the country.

Kathryn Bruner James, who won a seat on the Ferndale, Michigan City Council, ran as a non-partisan but was endorsed by the local Green Party chapter. She will serve a four year term for the city.

Libertarian Nate Kring beat the Republican incumbent who had been the city’s former mayor and long serving police chief.

Kring began to identify as a Libertarian in 2016, dissatisfied by the Republican Party's embrace of Trump. On a local level, Kring complained the Tipton Republican Party was not transparent and that Republican elected officials were not enforce the city’s codes and were raising taxes.

Kring said his biggest hurdle as a candidate was convincing people that voting for a him did not mean they were joining the Libertarian Party or that a third party vote was a wasted vote.

As a councilman, Kring sees himself as a problem solver, promising to fairly enforce city laws, collaborate with the county government to "share services and save money" and make the municipal government more transparent.

"The county live streams meetings, but the city doesn't,” he said.

Indiana has elected 28 Libertarian officials to public office since 1992. The 2019 elections saw Nate Kring and four other Libertarians elected or re-elected in the state.

The 2020 primary season looms for Democrats and Republicans, with most third party candidates getting scant attention by the news media. Johnson and Stein have both ruled out leading their respective party's tickets in 2020.