Updated at 6:25 pm on Nov. 13
WASHINGTON — U.S. President Donald Trump took a direct interest in whether Ukraine would open an investigation into former Vice President Joe Biden while Trump was withholding vital military aid from Kyiv, the top American diplomat in Ukraine told the impeachment inquiry on Wednesday.

The envoy, William Taylor, recounted a previously undisclosed conversation a staff aide overheard on July 26, a day after Trump had asked Ukrainian President Volodymyr Zelenskiy to investigate Biden, his son Hunter Biden's work for the Ukrainian natural gas company Burisma, and a debunked theory that Ukraine, not Russia, had meddled in Trump's 2016 campaign for the White House.

Taylor said the aide overheard a conversation between Trump and Gordon Sondland, a million-dollar Trump political donor that the president appointed ambassador to the European Union.

Taylor said the overheard conversation showed that at the time, Trump cared "more about investigations than Ukraine" military assistance. Taylor said Sondland had told him "everything" — the military aid and Zelenskiy's desired visit with Trump at the White House — depended on whether Ukraine opened the investigations.

Taylor said that in a long diplomatic career, he had never before witnessed a U.S. president asking a foreign government for a political investigation to benefit himself. Both he and George Kent, a State Department official overseeing U.S. relations with Ukraine, testified that they'd had no contact with Trump during the several months the Ukraine controversy played out.

U.S. campaign finance law forbids asking a foreign government for help in a U.S. election. But ultimately, U.S. lawmakers will have to decide whether Trump's actions amounted to "high crimes and misdemeanors," the standard in the U.S. Constitution for impeaching a president.

The two diplomats told the impeachment investigation that Trump created an "irregular channel" to deal with Ukraine, headed by his personal attorney, Rudy Giuliani, in hopes of getting Kyiv to open the investigations to help Trump politically.

The State Department officials said that over time, they realized that Giuliani, a former New York mayor, was acting at Trump's behest outside normal State Department confines, sidelining normal relations between Washington and Kyiv.

The investigations Trump wanted Ukraine to open came at a time he was blocking the release of $391 million in military aid Kyiv wanted for its fight against pro-Russian separatists it was fighting in the eastern part of the country.

Central to the House impeachment inquiry is Trump's half-hour phone conversation on July 25 with the newly elected Zelenskiy, in which Trump asked Zelenskiy for "a favor" — open an investigation of the Bidens.

The impeachment investigation was launched by the Democratic-controlled House of Representatives after an anonymous government whistleblower troubled by Trump's request to Zelenskiy for the Biden investigation filed a complaint with the intelligence community inspector general.

Republican supporters of Trump have pressed for the unnamed official to testify before the impeachment panel, but Democrats voted Wednesday to reject his appearance, partly to protect the whistleblower's identity and safety, but also because much of his statement has been corroborated by other witnesses. Trump has said he should be able to confront his initial accuser. 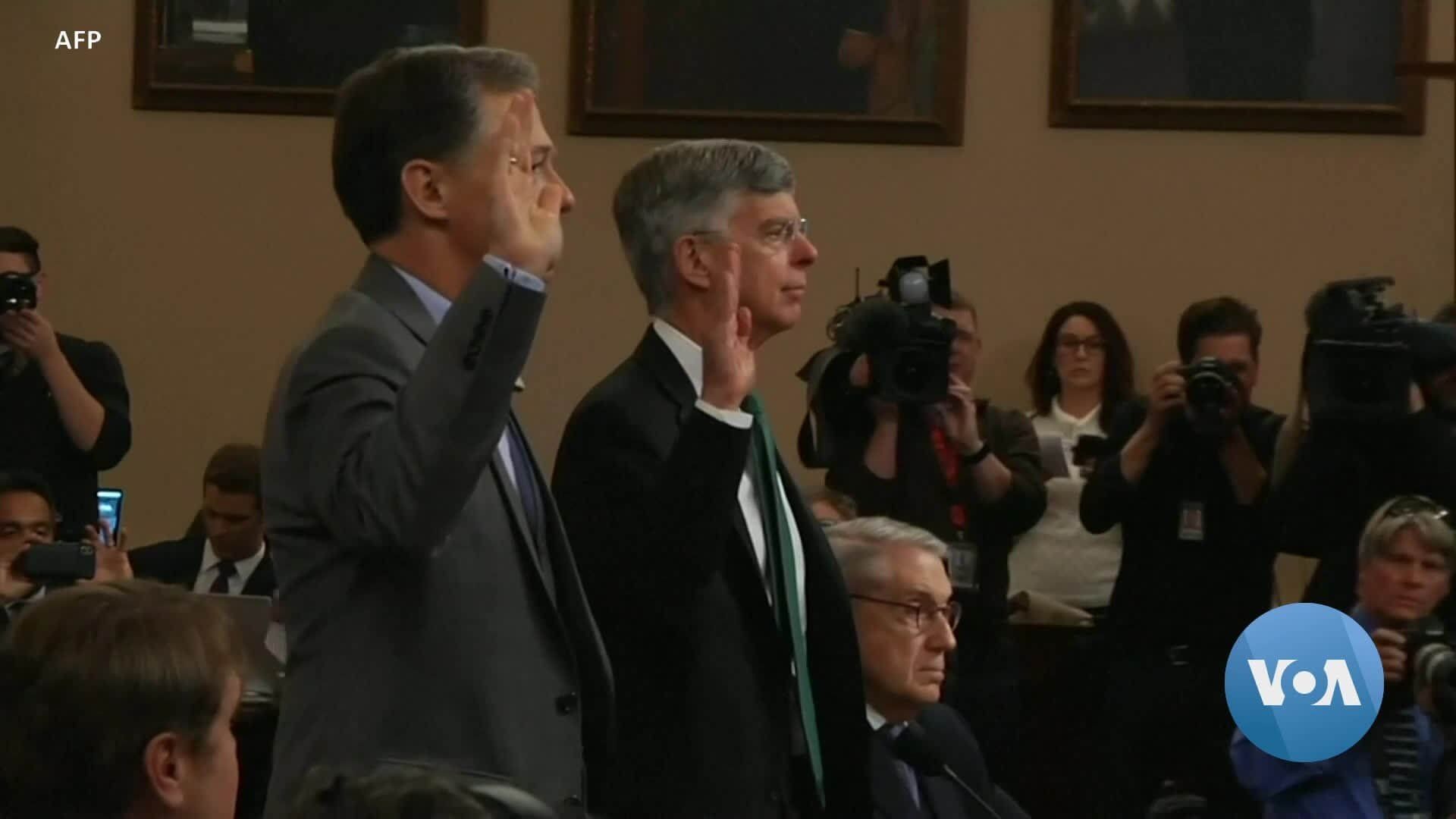 Under questioning from a staunch Trump supporter, Republican Congressman Jim Jordan, Taylor acknowledged that while he met with Zelenskiy three times over the summer months, linkage of military aid to investigations of the Bidens was never mentioned.

Trump, under pressure from U.S. lawmakers to release the assistance, eventually dispatched the aid on Sept. 11, even though Ukraine had not opened the investigations.

Republicans defending Trump say the fact that the aid was eventually released is key evidence to support the president's claim there was no quid pro quo — military aid in exchange for investigating the Bidens.

But Taylor said that Zelenskiy's staff was preparing for the Ukrainian leader to "make some kind of statement" on CNN about the investigations when he was in New York in late September for the annual United Nations General Assembly, an announcement that was abandoned when Trump released the money.

As the hearing unfolded, the White House pushed back against the testimony and the proceedings that threaten Trump's three-year presidency.

"This sham hearing is not only boring, it is a colossal waste of taxpayer time & money," Trump spokeswoman Stephanie Grisham said. "Congress should be working on passing (a new trade treaty with Canada and Mexico), funding our govt & military, working on reduced drug pricing & much more. @realDonaldTrump is working right now-the dems should follow his lead!"

In the Oval Office, Trump told reporters, "I'm too busy to watch it. It's a witch hunt. It's a hoax."

Congressman Adam Schiff, leader of the Democratic effort to impeach Trump, accused the president in his opening statement of pressuring Ukraine for the politically tinged investigations while withholding the military aid.

"The matter is as simple and as terrible as that," said Schiff, chairman of the House Intelligence panel. "If this is not impeachable conduct, what is?"

Republican Congressman Devin Nunes, a staunch Trump defender, called the hearing a "televised theatrical performance" and an "impeachment process in search of a crime." He belittled secret hearings over the last several weeks and called the release of transcripts of officials who have testified against Trump a "carefully orchestrated media smear campaign."

Taylor and Kent were testifying publicly after weeks of closed-door hearings.

More than a dozen current and former diplomatic and national security officials, including Taylor and Kent, laid out the case in private testimony that Trump temporarily withheld the military aid to Ukraine to fight the pro-Russian separatists unless Zelenskiy publicly promised to open the Biden investigations.

In the hours ahead of the testimony, Trump railed against the impeachment effort, quoting one supporter who noted that Trump eventually released the U.S. assistance to Kyiv in September without the investigations of the Bidens being opened.

Trump said the witnesses expected to testify about his actions involving Ukraine are "NEVER TRUMPERS!"

Almost uniformly, the witnesses are career diplomats and national security officials who have worked for both Republican and Democratic administrations. In the case of Sondland, a key witness who will testify next week, Trump appointed him ambassador to Brussels.

Both Taylor and Kent denied they are "Never Trumpers." Kent said he has served under three Republican presidents and two Democratic chief executives.

Trump has described his late July call with Zelenskiy as "perfect" and urged Americans to "READ THE TRANSCRIPT!"

Schiff said Taylor, Kent and a third witness — Marie Yovanovitch, a former U.S. ambassador to Kyiv set to testify on Friday — "bring decades of dedicated and exemplary service to our nation."

According to memos circulating Tuesday to party members, Republicans insisted that Trump had a "deep-seated, genuine and reasonable skepticism" about corruption in Ukraine and that his withholding aid was "entirely reasonable."