President Donald Trump was in Texas Thursday, where he held a campaign rally in the city of Dallas to drum up support in a state that until recently could be counted on to vote Republican.

In front of an enthusiastic crowd, Trump boasted about the U.S. brokered cease-fire deal reached with Turkey, whereby Ankara agreed to temporarily suspend its military operation in Syria to allow Kurdish forces to retreat from a designated safe zone.
“Turkey is going to be happy, the Kurds are going to be happy, ISIS is going to be unhappy,” Trump said, using an acronym for the Islamic State terror group.

The agreement was announced Thursday by Vice President Mike Pence after meeting Turkish President Recep Tayyip Erdogan in Ankara. The pause in fighting comes a week after Trump withdrew U.S. troops from the Kurdish-held area in northern Syria, which effectively cleared the way for Erdogan to launch an offensive against the Kurdish YPG forces and wreaked havoc in the region, triggering concerns over an Islamic State resurgence.

Roundly criticized for the decision, even by Republican allies, Trump admitted that his approach was “unconventional.”

Impeachment ‘a load of bull hockey’

Trump has given Texas a lot of attention — this is his sixth visit to the state and his third Texas campaign rally in the past year. He also held a fundraising trip through Houston and San Antonio in April, visited El Paso in the wake of a deadly mass shooting in August, and joined Indian Prime Minister Narendra Modi for a “Howdy Modi” event last month.

It is also Trump’s first visit to the state since House Democrats began their impeachment inquiry, something his supporters dismiss.

“It’s a load of bull hockey,” said Vicky Debolt from North Texas. “If it was real, they would have brought it out sooner. So I think it’s just a lot of bull hockey and a bunch of lies and I don’t believe it,” she said.

Mike Adams from Decatur, Texas, said he does not believe Trump was pressuring Ukrainian President Volodymyr Zelenskiy for dirt on his political opponent, former Vice President Joe Biden, the allegation on which House Democrats are basing their impeachment inquiry.

“If somebody knows that other people did something wrong in their country, and you can talk to them about it, and they can help share that. What’s wrong with that?” Adams said.

There is no evidence of wrongdoing by Joe Biden nor his son Hunter Biden, as Trump has alleged.

Trump insists he did nothing improper in his call with Ukrainian President Zelenskiy. But on Thursday, Mick Mulvaney, the acting White House chief of staff, admitted that the administration withheld nearly $400 million in military aid to pressure Ukraine to investigate the Democrats.

Asked about Mulvaney’s statement that contradicts Trump’s position that there is no quid pro quo in his dealing with Zelenskiy, the president said he has “not heard anything about it,” adding that “Mick is a good man.”

Trump also said that he has accepted Rick Perry’s resignation. The secretary of energy is also entangled in the impeachment probe into Trump’s actions involving Ukraine. 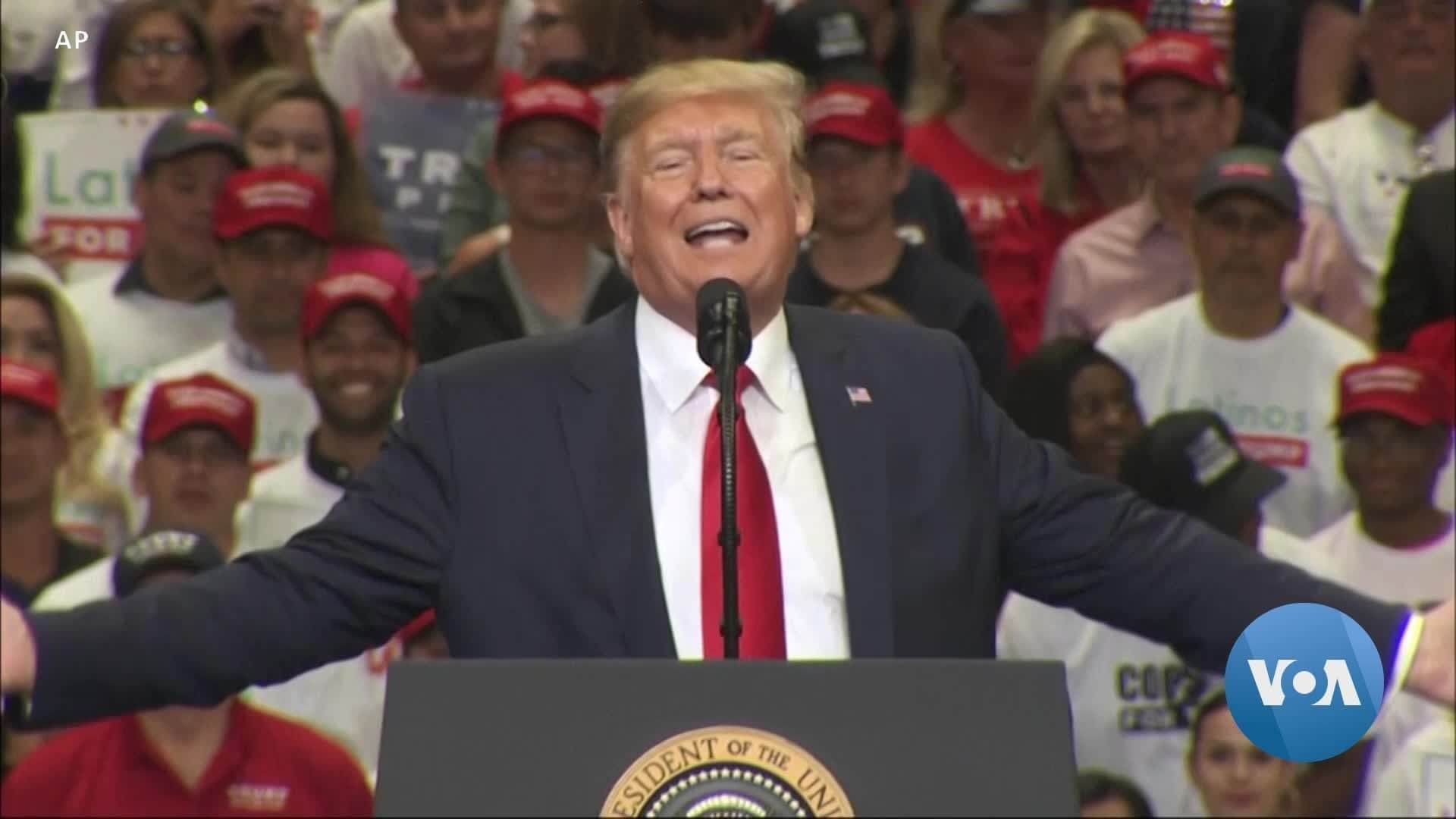 The Dallas-Fort Worth Metropolitan area is important to Trump as it is a solidly blue region in a state that until recently was staunchly Republican.

“Dallas is probably the No. 1 target area,” said Harvey Kronberg of the Quorum Report, a publication focused on Texas politics. “I don’t think the president is vulnerable in Texas. But I don’t think his numbers are nearly as good as we would normally presume, and he’s got to keep the base fired up,” Kronberg added.

Dallas is also one of the largest cities in the United States with a large suburban area where a lot of the election fight will take place, said Shannon Bow O’Brien, who teaches American politics at the University of Texas at Austin.

A rally held in an arena with a 20,000-person capacity in a conservative state may also provide a welcome diversion for an embattled president with an impeachment inquiry and a foreign policy crisis.

Before the rally, the president attended a ribbon-cutting ceremony at the new Louis Vuitton Rochambeau factory in Alvarado, Texas, with Bernard Arnault, chairman of the French luxury conglomerate.

Louis Vuitton signed the “Pledge to America’s Workers,” a Trump administration initiative to bring “better jobs that deliver bigger paychecks” to American workers. The leather-goods workshop in Keene, a small town near Alvarado is expected to create about 1,000 jobs over the next five years.

The luxury brand will be getting a 10-year, 75% tax abatement from the county, the maximum allowed, which amounts to about $91,900 in tax cuts a year.

Meanwhile, Democratic presidential candidate Beto O’Rourke staged a counter-rally Thursday at the Verizon Theatre at Grand Prairie about 22 kilometers away.

“Our message is solidarity,” said Tramon Arnold, political director of the Dallas County Democratic Party, “We’re not here to make any ill-light of the (Trump) event but to show solidarity that we’re here to make sure that we get President Trump out of office.”

Saqib Ul Islam and Jesusemen Oni contributed to this report.

Trump Seeks to Rally Supporters in TexasNext PostCensure: When Congress Punishes One of Its Own