Two weeks of public hearings in the impeachment inquiry into President Donald Trump's dealings with Ukraine have deepened the already sharp divide between Democrats and Republicans and have prompted many lawmakers to place more of a premium on party loyalty than the quality of testimony, some political analysts say.

With 2020 presidential and congressional elections looming, the stakes couldn't be higher for the two parties. And lawmakers are adhering closely to the guidance of their party leaders.

In the recent U.S. House vote setting procedures for the public phase of the impeachment inquiry, not a single Republican defected to vote with the Democrats in favor of formalizing the inquiry. Only two Democrats voted against it.

Those numbers are in stark contrast to the 1998 vote formalizing the impeachment inquiry of then-Democratic President Bill Clinton. In that vote, 31 members of the president's own party agreed with his Republican opponents' decision to launch the investigation.

Since the start of the public phase of the inquiry into whether Trump tried to pressure the Ukrainian government into announcing an investigation of Vice President Joe Biden and his son, Hunter, while withholding nearly $400 million of military aid to Ukraine, Democrats and Republicans seemingly have operated in parallel universes. Testimony has been twisted into competing narratives.

House Democrats hailed Sondland's testimony that linked Trump, Vice President Mike Pence, Secretary of State Mike Pompeo and others to a campaign to pressure Ukraine's new president to announce an investigation of Biden in return for a White House meeting and the release of the military aid.
Meanwhile, Republicans and Trump insisted that Sondland had cleared Trump of seeking a quid pro quo with Ukraine.
Cashing in on controversy
Both parties are fundraising robustly off the impeachment inquiry, sending floods of email to supporters in anticipation of impeachment becoming a central issue that mobilizes voters in the upcoming election.
Democratic and Republican lawmakers would argue they are acting according to conscience, not political expediency. But impeachment is not a legal trial but an inherently political process in which the framers of the U.S. Constitution invested the responsibility of impeachment in the legislative body of government.
House Speaker Nancy Pelosi of California has said Democrats entered the impeachment inquiry in a "prayerful" way, mindful of their oath to uphold the U.S. Constitution. Trump accused Democrats of launching the inquiry because they feared losing in the 2020 presidential election.
Pelosi has repeatedly said Democrats see impeachment as a last resort that is part of their oversight responsibilities.

'Sad time for the country'
Democrats who control the House have tried to maintain an attitude of remaining above the political fray.
"This is a very sad time for our country. There is no joy in this," Pelosi said.
Representative Jim McGovern of Massachusetts, author of the impeachment inquiry legislation, said, "We are not here in some partisan exercise. There is serious evidence that President Trump may have violated the Constitution."
Republicans have characterized the inquiry not only as an attempt to cripple Trump's political fortunes but also as a "coup" or an effort to nullify the results of the 2016 presidential election.
Representative Devin Nunes of California, the ranking Republican member on the House Intelligence Committee conducting the public hearings, regularly accuses Democrats of politicizing the process.
'Impeachment mania'
"Democrats have exploited the Intelligence Committee for political purposes for three years, culminating in these impeaching hearings. In their mania to attack the president, no conspiracy theory is too outlandish for the Democrats," Nunes said in his opening statement for the Nov. 20 hearing.
High-profile lawmakers on both sides often appear to be looking for a social media-friendly moment that supporters can amplify.
The Trump War Room Twitter account rebuts the hearings in real time with memes, while users who identify as part of the Democratic "Blue Wave" from the 2018 midterm election fight back. This deepens the perception there are two entrenched political perspectives with no room to meet in the middle.

The online war is reflected in real life by alliances of some of the nation's top political groups. On the conservative side, groups such as the Club for Growth and FreedomWorks have joined forces to raise money and public outcry against impeachment, according to The Washington Post.
On the Democratic side, the Democratic Congressional Campaign Committee distributes email soliciting donations and grass-roots action in Pelosi's name, claiming, "I know Trump's terrified of the work we're doing every day to hold him accountable for his actions."
Tight spot for Republicans
Analysts say congressional Republicans are in a tight spot, defending a president who virtually controls their party in a highly polarized political environment.
"The president has demonstrated an ability where he's most assuredly struck fear in the hearts of every Republican, anybody who goes against him," said Steven Billet, legislative affairs program director at the George Washington University Graduate School of Political Management.
"Go ask Jeff Flake. Go ask Bob Corker. Go ask all these other people that have turned against the president," Billet said, referring to two former Republican senators critical of Trump who retired. "He went after them. He mobilized the base against [them] and struck fear in their hearts. He's disciplining a party that's already polarized and already moving to a more ideological place on the spectrum."

WATCH: Trump Insists on Exoneration in the Face of Startling, Contradictory Testimony 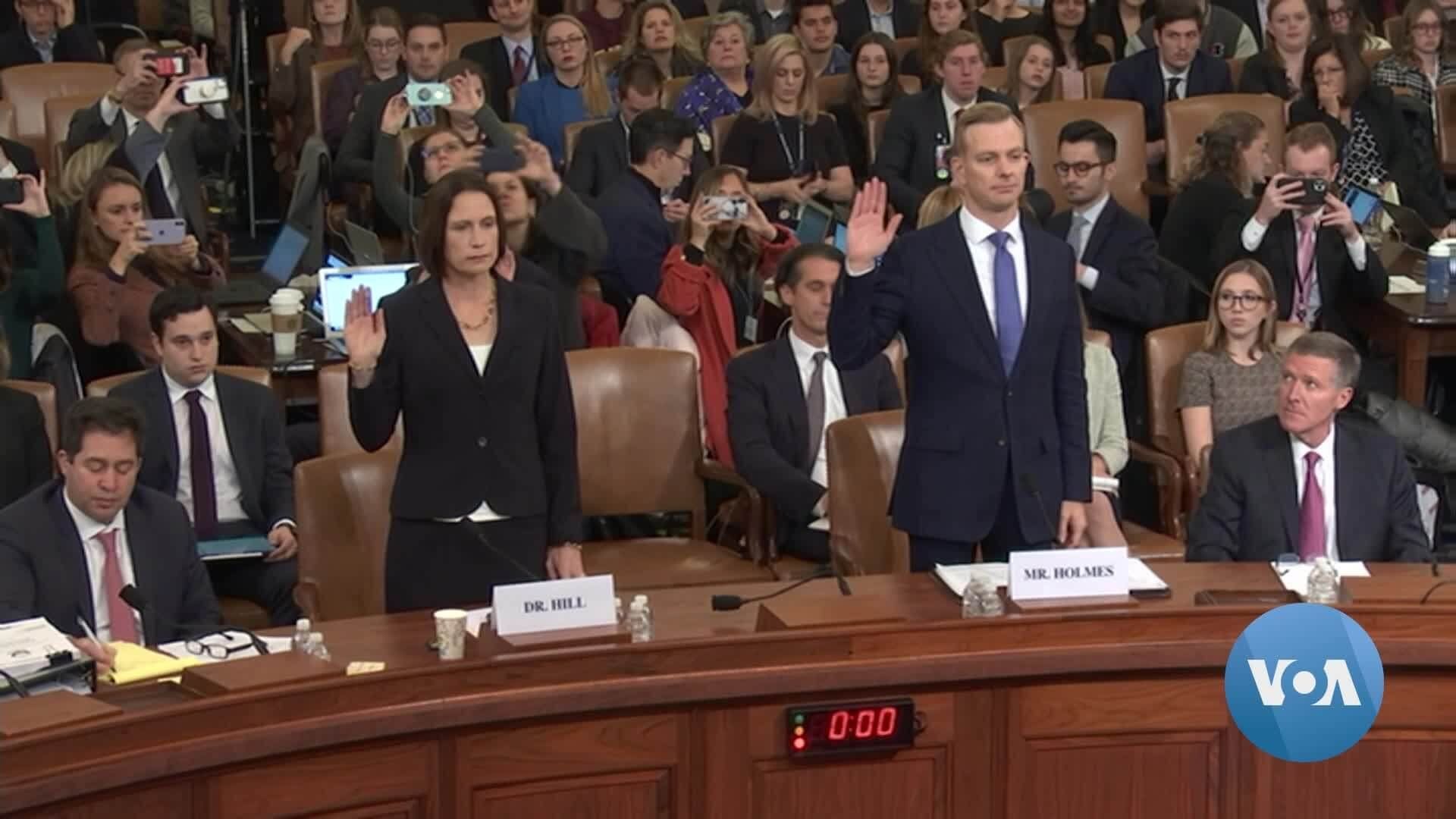 Divided nation
The American public is divided almost evenly, according to a FiveThirtyEight aggregation of opinion polling on impeachment. While support for removing Trump from office has grown since Pelosi's announcement formalizing the inquiry, 45.5% still do not support the move, while 47.7% do.
The lack of a clear consensus reflects longer-term trends. Polling data collected over recent decades show that Americans have become increasingly divided politically.
In a survey conducted just before Pelosi announced the formalization of the impeachment inquiry, Pew Research found that "both Republicans and Democrats express negative views about several traits and characteristics of those in the opposing party, and in some cases these opinions have grown more negative since 2016."
Earlier this year, 85% of respondents said in another Pew survey that the tone and nature of political debate in this country had become more negative.

Trump vs. Nixon
The political polarization does not bode well for Democrats who may hope Trump will eventually face pressure from his own party. In an interview Sunday with CBS News' "Face the Nation," Pelosi compared Trump's actions to those of Richard Nixon, the only U.S. president to resign from office.
Nixon stepped down after the House Judiciary Committee approved articles of impeachment, avoiding a full floor vote. Nixon reacted partly because he faced considerable pressure from Republicans to sacrifice his own personal political fortunes for the good of the party.
If the House decides to impeach Trump, the vote is again expected to fall along party lines.
The next key test of loyalties will then occur when the House sends the articles of impeachment to the Republican-controlled Senate for a trial. Senate Majority Leader Mitch McConnell of Kentucky and Minority Leader Chuck Schumer of New York will have to set ground rules covering everything from how many days a week the trial is held to how senators can cast their votes.
In today's intense political environment, even the ground rules for debate will be up for debate.