Myroslava Gongadze and Kenneth Schwartz in Washington contributed to this story.

Democratic Speaker of the House Nancy Pelosi announced a formal impeachment inquiry into U.S. President Donald Trump and allegations that he sought a foreign government's help with his 2020 re-election bid.

"The actions taken to date by the president have seriously violated the Constitution," Pelosi said. "The president must be held accountable. No one is above the law."

Pelosi made her announcement after huddling inside the Capitol with House Democratic leaders, as the number of Democratic lawmakers who support impeachment proceedings grew throughout the day Tuesday. 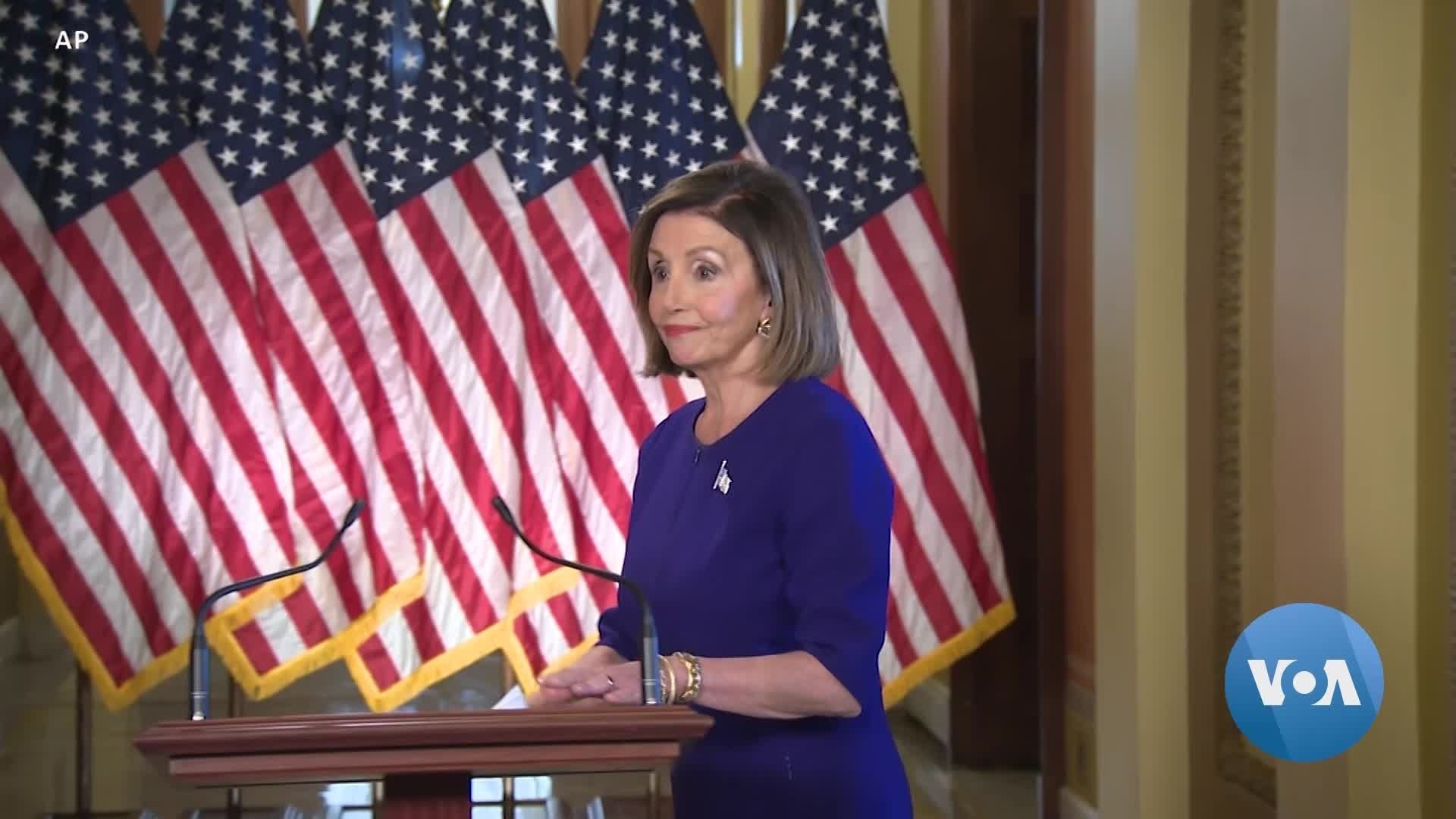 "There have been a lot of egregious acts. But there's nothing that compares to this. This is the president basically saying, 'Yes, I colluded. What are you going to do about it?'" Democratic Representative Tom Malinowski told reporters.

Pelosi accused Trump of betraying his oath of office, U.S. national security and the security of U.S. elections.

“For the past several months we have been investigating in our committees and litigating in the courts so the House can gather all the relevant facts and consider whether to exercise its full Article 1 power, including a constitutional power of the utmost gravity, approval of articles of impeachment,” Pelosi said.

In her remarks, she referenced founding father Benjamin Franklin's description of the new U.S. government as “a republic, if you can keep it,” adding, “Our responsibility is to keep it."

Meanwhile, reporters covering the president were held at the Trump Tower bar until dinner at 7 p.m., where they watched Pelosi deliver her speech on TV.

Within minutes of Pelosi's appearance, Trump responded with several tweets. “PRESIDENTIAL HARASSMENT!" he said in one. "Such an important day at the United Nations, so much work and so much success, and the Democrats purposely had to ruin and demean it with more breaking news Witch Hunt garbage. So bad for our Country!" he said in another.

For months, Pelosi has resisted opening a formal impeachment inquiry into Trump over earlier allegations of obstruction of justice stemming from special counsel Robert Mueller's investigation into Russia's influence in the 2016 election.

But the pressure on Pelosi has grown in recent days over reports Trump urged Ukrainian President Volodymyr Zelenskiy to investigate Democratic presidential candidate and former Vice President Joe Biden over a high-paying job his son Hunter had with a Ukrainian gas company.

Biden has been the Democratic front-runner for the presidential nomination and a potential rival to Trump in the 2020 election.

Trump said he would release the "complete, fully declassified and unredacted" transcript of his July telephone call with Zelenskiy on Wednesday. Trump and Zelenskiy are also scheduled to meet Wednesday in New York before Trump participates in what will be a highly anticipated press conference.

But Pelosi and other Democrats say there is much more to the allegations against Trump than just a telephone call.

Trump confirmed he told his staff to withhold $400 million in aid to Ukraine days before the July call. Democrats want to know whether Trump pressured Zelenskiy into investigating Biden, knowing the Ukrainian government badly wanted the U.S. aid.

"You will see it was a very friendly and totally appropriate call. No pressure and, unlike Joe Biden and his son, NO quid pro quo! This is nothing more than a continuation of the Greatest and most Destructive Witch Hunt of all time!" Trump tweeted Tuesday.

He said he withheld the money until other countries, including those in Europe, also helped Ukraine.

The current controversy began last week when reports emerged that an unidentified whistleblower in the national intelligence community became alarmed about a series of actions inside the Trump administration, which include what is now known to be Trump's telephone call with Zelenskiy.

The whistleblower contacted the intelligence inspector general, who called the complaint "serious" and "urgent."

After initially refusing to hand over the whistleblower's complaint to Congress as required by law, a senior Trump official said late Tuesday the White House will make it available to Congress by the end of the week.

House Intelligence Committee Chairman Adam Schiff said Tuesday that the whistleblower's lawyer informed him that he or she wants to meet with the committee. Schiff said that meeting could take place as soon as this week.

The Senate, by unanimous consent, agreed on a nonbinding resolution that the whistleblower's complaint be immediately handed over to the House and Senate Intelligence committees. The House is expected to consider the resolution on Wednesday.

In 2016 as vice president, Biden went to Ukraine and threatened to withhold billions of dollars in U.S. loan guarantees unless the government cracked down on corruption. Biden also demanded that Ukraine's chief prosecutor, Viktor Shokin, be fired.

Shokin had previously investigated the gas company in which Hunter Biden served on the board. But the probe had been inactive for a year before former Vice President Biden's visit. Hunter has said he was not the target of any investigation, and no evidence of any wrongdoing by the Bidens has surfaced.

The former vice president said Tuesday if Trump does not comply to a congressional demand to hand over all the information related to the Ukraine situation, "Donald Trump will leave Congress no choice but to initiate impeachment."

"This isn't a Democratic issue or a Republican issue. This is a national issue," the former vice president said. … "It's an abuse of power. … It strikes at the heart of the sworn responsibility the president has to put the national interest before his personal interest."

Zelenskiy plans to meet with Trump Wednesday during the United Nations General Assembly in New York.

VOA asked Zelenskiy about the current controversy. He declined to comment other than saying, "We have an independent country. We're ready for everything."

He said he believes his talks with Trump will be "very warm."

Who the hell does Prince Harry think he is calling our 1st Amendment “bonkers?”@Nigel_Farage has some words for him tonight at 7pm on #DrGina #PrimeTime @RealAmVoice.