How and Why President Trump can be Un-Impeached

Speaker Nancy Pelosi has become one of those characters that if she were not so vile, one could almost feel a twinge (only slight) of sympathy for her.

Not only has she served for decades on Capitol Hill, but she is also the prolific fundraiser for her party in nearly all of the history of the Democrat Party. In other words, she was one of the most feared and yet also respected Congresswoman on the hill in D. C. The tragedy for Pelosi is that she bought a bill of goods from a few psychopathic freshmen and a few radical old-timers such as Mad Maxine Waters and Al Green.

For months leading up to September, Pelosi had made repeated public statements that she would not proceed with Impeachment hearings until she had “bi-partisan” support for such action. Finally, she buckled and nodded her go-ahead to Representatives Adam Schiff and Jerry Nadler to proceed with hearings in their respective sub-committees. 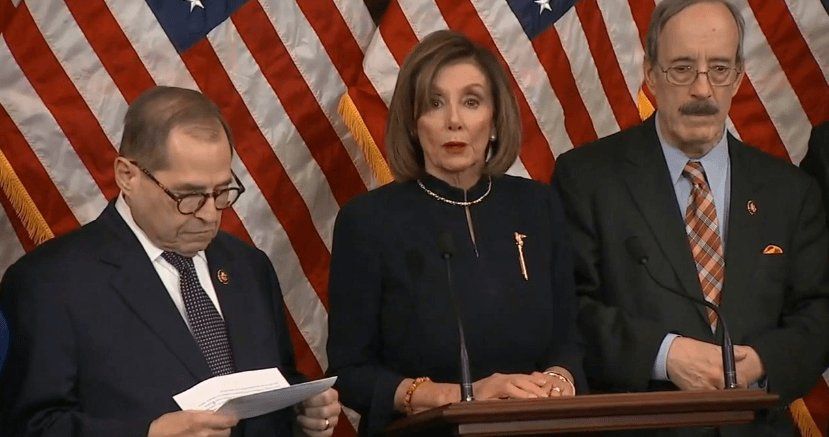 After Schiff and Nadler were finished with their hearings (which were beyond corrupt), the Dem’s finally decided they could hold a vote to proceed to the full house for floor arguments and a vote for impeachment. Keep in mind that all of this occurred while Constitutional Scholars nationally were shaking their respective heads in disbelief that Speaker Pelosi would actually approve this to proceed forward. Most agreed that there simply was not enough evidence to proceed into impeachment territory at all.

We have now come to the point where they did in fact impeach President Trump based on two charges.

Looking at the abuse of power charges, most prosecutors are all agreeing that this charge would not even make it to court as the judge would throw it for lack of evidence. The keyword in the transcript (which the Dem’s based this charge on) is the word “US.” What the President claims is that he meant the United States when asked the President of Ukraine to do “us” a favor. He in no way meant for the Ukraine President to do him a personal favor for political reasons.

The fact is, President of nations just as presidents of major corporations ask other presidents all the time to do favors for them.

The day that a President of the United States can never ask other leaders to do favors is the day that leaders will stop talking to each other. This is extraordinarily dangerous for future leaders of this nation.

The obstruction of Congress charge is absolutely ludicrous. One should not have to “hand over” evidence or employees to assist the prosecutor in charging them. It is up to the prosecutor to come up with enough evidence on their own, not look to the (in this case) victim for prosecutorial evidence to convict them with.

Now it seems that Speaker Pelosi is driving the last nail in her coffin. I say the last nail because she knew full well going in that this impeachment would likely not even see a trial in the Senate. Leader Mitch McConnell had already telegraphed that he did not have the votes to convict, in fact, not even come close to a conviction. Senators Graham, Cruz and many more said that they would not even vote to hold a trial, let alone carry one out. So, this begs the question, why did Pelosi follow through with this sham of an impeachment in first place?

Nobody seems to have an answer to this question, but the one bit of interesting news is this.

If, and to be honest, it is a long shot, but if the House can be returned to the Republicans, this could possibly happen.

The House of Representatives could in effect vote to rescind the impeachment, then send it over to the Senate for ratification. This would strike down Nancy Pelosi’s impeachment and the President would be cleared.

For this to happen America, the first phase is to work your butts off to defeat every possible Democrat. You can do this, but it would take an enormous amount of money, volunteering efforts on your parts, and long hours.

If you believe as I do that President Trump was railroaded, then we need to show up, put our money up, and invest your time. This would most definitely be a historical first, but if America is angry enough, this could happen, but it will be up to all of us to make it happen.

Now you have your mission. Call your friends, call your family, and call the neighbor. Tell them that this can be stopped and overturned, but a good Republican needs your help to make it a reality. If you happen to live in a Republican district, then find a Democrat-held district near you, and support that Republican. Call the campaign office, go online, but get involved in some fashion. Of course, money is a major factor.

Let’s ban together, and bring this home for President Trump. He deserves it, America deserves it, and its something we can all celebrate on election night together.