U.S. Democratic presidential candidates hold their fifth debate Wednesday night in Atlanta, with the showdown taking place amid shifting polls and a growing sense of uncertainty about where the primary race is heading.

A total of 10 contenders will be on stage in a race that of late has been overshadowed by the unfolding impeachment saga involving President Donald Trump in Washington.

The two leading contenders, according to national polls, former Vice President Joe Biden and Massachusetts Senator Elizabeth Warren, will be center stage in the Atlanta debate.

But one candidate drawing extra attention at the moment is South Bend, Indiana, Mayor Pete Buttigieg. Buttigieg has surged into the lead in the early voting state of Iowa, according to the latest CNN/Des Moines Register/Mediacom poll of likely Iowa voters.

Buttigieg placed first with 25 percent support, followed by Warren at 16 percent, and Biden and Vermont Senator Bernie Sanders both at 15 percent. The rest of the Democratic field trailed in single digits.

Buttigieg said in Los Angeles that his campaign has been making steady progress for months.

“The more voters hear my message, the more supportive they become and the more we are able to grow our base,” he said.

Biden continues to lead in national polls and in a new Quinnipiac University survey of voters in South Carolina, which is also an early voting state in the primary process.

Bolstered by support from African-American voters, Biden leads in South Carolina with 33 percent backing, followed by Warren with 13 percent and Sanders at 11 percent.

On the campaign trail, the former vice president continues to argue he would be the strongest candidate to take on President Trump next year.

“Whoever among us ends up being the nominee for the Democratic Party, the next president is going to inherit two things for certain – a nation that is divided and a world in disarray,” Biden told a rally in Iowa last week.

Even though Warren remains near the top of the Democratic field, she finds herself on the defensive of late over her sweeping plan for a government health care program known as Medicare-for-all.

The senator recently announced a more phased-in approach to her health care plan as she rallied supporters in Las Vegas, Nevada.

“Come caucus for me and come fight alongside me, because this is our time to dream big, to fight hard and to win,” she told the crowd.

One new Democratic contender who will not be in the debate is former Massachusetts Governor Deval Patrick, who announced last week that he was entering the race.

“This campaign, I think, is an opportunity to bring people together,” Patrick said.

The former two-term governor has had a long friendship with former President Barack Obama.

Analysts see both Bloomberg and Patrick as moderates who could pose a threat to Biden if they are able to gain traction in the campaign.

Even though Biden continues to lead in national polls, he trails in Iowa and is in a tight race with Warren and Sanders for the New Hampshire primary, another key early contest that comes one week after Iowa.

The interest among additional candidates to join the race raises questions about the current field of contenders, said University of Virginia analyst Larry Sabato.

“It is obvious that many Democratic leaders are very worried about the top echelon (of the Democratic field). Each of the candidates has problems—too old, too young, over-experienced and under-experienced, and then too far left, too far right. You name it,” Sabato told Associated Press Television. 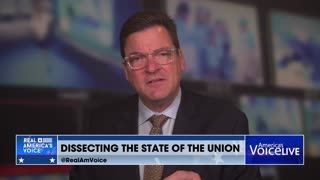 Steve Gruber Breaks Down the State of the Union Address

‘The Water Cooler with David Brody’ Bids A Fond Farewell

Will Patriotism Determine the White House in 2024?