When Kimberly Dudik ran for her fourth term in the Montana House, state officials told her she could not use campaign money to pay for child care for her four young children.

She is now running for attorney general and is trying to visit a big chunk of the sprawling state, spending hours on the road. That means she needs even more help picking up her kids at school and day care when she's away and her husband has a late night at the office.

"It just seems behind the times," Dudik, whose family is living off her husband's income and savings from her work as a lawyer. "When it was a man campaigning, the woman was traditionally the one to stay home and take care of the children. There is not someone home just taking care of the kids."

Experts predict a large number of women will again run for office in 2020 like they did in 2018, and child care remains a hurdle for many of them.

A congressional candidate in New York successfully petitioned the Federal Election Commission in 2018 to allow campaign money to help cover child care costs. But it applies only to those running for federal office.

That leaves women in many states who are running for the Legislature, statewide positions like attorney general or local offices to find another way to pay for child care as they campaign, which often requires night and weekend work.

Only six states have laws specifically allowing campaign money to be used for child care. Five states are considering it. In most states, including Montana, the law is silent on the issue and up to interpretation by agencies or boards. Agencies in at least nine states have allowed child care to be a campaign-related expense, but those decisions are not law and could be reversed.

Utah is among the states that passed a gender-neutral child care expense law, which went into effect last May. Sponsored by Republican state Rep. Craig Hall, it easily passed the GOP-dominated legislature.

Luz Escamilla was one of the first candidates to use it as she campaigned to become the first Latina mayor of Salt Lake City. Escamilla had to take time off from her full-time banking job to knock on doors and shake hands as she made her case to voters.

Without a paycheck, it was hard to cover the cost of child care for her two youngest daughters. After the law was passed, she used about $1,500 in campaign cash over two months to help pay for it. The extra time she could spend campaigning helped propel her to a spot in the general election, though she lost in November.

"Full-time campaigning during the summer with toddlers, it makes it really difficult," Escamilla said, adding of the law: "It was a great tool in our toolbox."

Lawmakers in Minnesota added child care as an allowable expense in 2018, while Colorado, New York, New Hampshire and California passed laws in 2019.

Before Colorado allowed campaign cash to be used for child care, Amber McReynolds, a former chief elections official in Denver, was contemplating a bid for statewide office in 2017. The costs of child care were a considerable concern as a single mother of two young children.

For that and other reasons, McReynolds decided against running.

"When we look at the statistics in terms of representatives in Congress or statewide office and you don't see single moms in that category, that's why," said McReynolds, who's CEO of a nonprofit. "The circumstances are just that much more difficult when you are in politics."

The policy also can help fathers running for office in families where both parents work.

Jean Sinzdak, associate director of the Center for American Women and Politics at Rutgers University, said the record number of women who ran for office in 2018 has helped drive the issue. Still, lawmakers in a number of states have resisted the change.

In Tennessee, the sponsor of a measure to add child care to the list of approved campaign expenses faced a skeptical audience during a subcommittee hearing last spring.

"If they aren't running for office because they can't find child care, how are they going to do the job down here?" asked state Rep. John Crawford, a Republican from Kingsport, Tennessee.

The sponsor, Democratic state Rep. Jason Powell, said he introduced the proposal after people he tried to recruit to run for City Council in Nashville declined because child care needs kept them from campaigning.

"I hate that people in our state feel like they can't run for office because they may or may not be able to use their campaign funds for a child care expense," Powell said.

The measure failed to advance after a split vote of the all-male subcommittee.

In Louisiana, Democratic state House candidate Morgan Lamandre had her request denied by the state ethics board even though it allowed a Republican man to claim campaign-related child care expenses in 2000. Members, who were not on the panel two decades ago and didn't have to follow the previous decision, said they were concerned it could be abused.

After a backlash, the board reversed itself.

While she's used campaign funds to pay for child care a few times, Lamandre said it's not a panacea for smaller races where candidates might have to choose between paying a baby-sitter or buying basics like lawn signs.

'Time to remove the roadblocks'

Liuba Grechen-Shirley, who unsuccessfully ran for Congress on eastern Long Island and whose FEC petition led to child care expenses being allowed for federal candidates, started a group called Vote Mama to help mothers running for public office and hopes one day the expense is allowed in every state.

Caitlin Clarkson Pereira tried a similar approach to Grechen-Shirley's, but ended up suing Connecticut after a board denied her request. She was told she couldn't use campaign money to pay for child care for her young daughter during her state House race in 2018, which she ultimately lost.

Connecticut officials cited a program that allows candidates to tap taxpayer money after they raise a certain amount on their own. With public money involved, the state says child care should be considered a personal expense.

Pereira argued that it should be considered as necessary as meals or travel.

"This is the time to remove the roadblocks that are clearly in the way of parents and families being able to run for office," she said.

Dudik, the Montana candidate, said the lack of these laws shows the need to have more women in power so policies can be changed.

"If we want more women running for office, we need to make allowances to make that a reality and not just give lip service to it," she said. 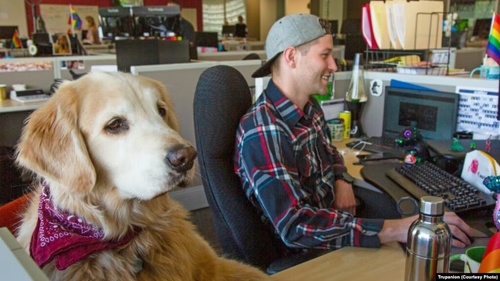 Dogs Are Coming Back to the Office With Their People
America's Voice Admin
February 6, 2023