Not so long ago, I was contacted by the Tulsi Gabbard campaign wanting to know if I would be interested in managing a $1,000,000 Super-PAC on behalf of the Hawaiian’s presidential campaign. Due to the fact that there has been almost zero television advertising in the Hawkeye State, I have to believe that their big donor from Hawaii has pulled his or her purse strings back and decided not to waste their money on this race.

Also, due to the fact that Gabbards Iowa ground game is so weak, I’m not giving her much of a chance here in the corn belt for a decent showing come February 3rd. I originally had thought that her moderate positions would carry her well into the top tier in Iowa. Still, since she hasn’t had the ability to form a cohesive campaign, she is now an after-thought across the fruited plain.

I go back to what I had originally said about Tulsi Gabbard. And by the way, I still believe it to this day, “she is the only Democrat that would have stood a chance against President Trump.” But as it went with Hillary Clinton, the Democrats have picked and chosen the ordained and blessed candidates, and those are who the party is pushing for the coronation at the convention.

The other reason I am very happy to report that the PAC position did not work out is that I have been a Trump supporter from day one, and am a devoted conservative. I honestly don’t think the heartstrings would have allowed me to work for a PAC, which supported a Democrat. But the pay sure would have been good.

Here is how Iowa is currently stacking up in the latest Real Clear Politics average polling.

Next week we have another Democrat debate. Will anyone be watching? At this point in time, I am not so sure the debate actually matters anymore. We all know where the candidates stand on positions of little importance. It seems as though all they can talk about is free everything, and when their on-stage, they seem to only fight about who can give away the most of our taxpayer dollars.

In case you happen to be wondering, Pocahontas seems to have the largest ground game in the state. Yet, she is slipping in the polls here. Why? It seems that since she does have the most widespread grassroots game, then it must be her message of “free-everything” that is not resonating. Even the Democrats seem to think that her promises are over the top and cannot be fulfilled. The big determining factor for the Democrat nominee will likely be “who qualifies” for the next debate. Here is the current lineup. 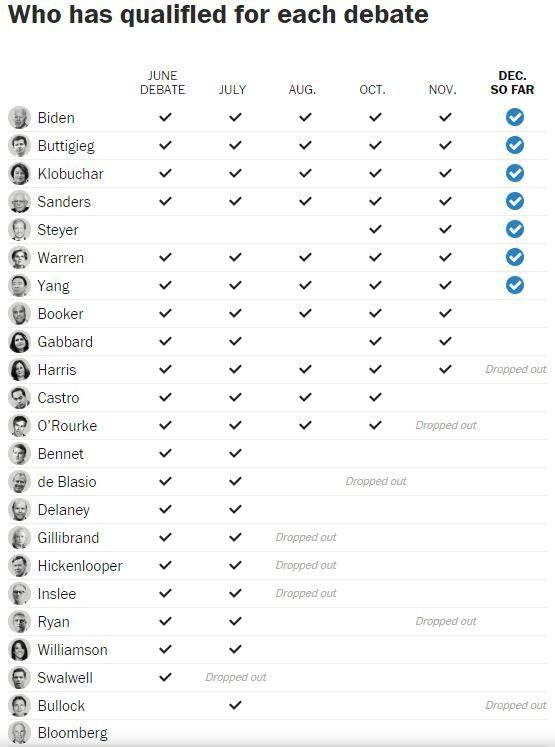 To prove the point, Mayor Pete is offering healthcare, but you have the choice to keep your own or sign up for the government plan. Pocahontas wants to take over all healthcare. Keep in mind that Iowa Democrats are not quite as radical as New York or California Democrats. Our Democrats tend to be either college-aged or senior citizens. This is the one bright spot in all of this for the Republicans.

Democrats down South are traditionally more conservative (with the exception of Miami and Atlanta).

Mayor Pete (because of his sexuality) will not get off first-base in the Southern States as they are also very Baptist in nature. This means that one of the other Dem’s such as Bloomberg or Biden will likely do well, and our pure socialist’s candidates will probably be tossed to the curb when Super-Tuesday arrives. The one exception being Senator Amy Klobuchar as she hasn’t adopted quite as much of the far left looney as some of the others. She is campaigning on “Mid-West values.”

This week leading up to the Christmas holidays does have many of the candidates crisscrossing the cornfields, holding town halls in every community, and visiting “anything agriculture” in our state. Elizabeth Warren’s numbers seem to be down at her events, while Bernie Sanders and Mayor Pete seem to be drawing larger crowds.

The $64 question, however, is this; Who can beat President Trump in 2020? The answer; Possibly Bloomberg, but that is only going to happen if he wins the nomination. It is still too early to know if he can get traction in the primary contests. The Democrat voters will determine that, but if it comes down to anyone in this field, the answer is, Trump, wins in a landslide.