These Dems Are the Most Likely To Take On the President and Here is How Trump Prevails.

The Most Likely Democrat Contenders:

Iowa of late has seen some changes that the national media has not picked up on yet. While the national polling still has former Veep Biden in the lead by a relatively healthy margin, that doesn’t seem to be the case in either Iowa or New Hampshire.

The truth is, Biden has virtually no ground game in Iowa, at least in comparison to Elizabeth Warren. In other words, if the caucuses were held today in Iowa, Warren would lay waste to Joe Biden and be doing her victory dance.

The two most shocking stories about the early states are; Mayor Pete Buttigieg and Congresswoman Tulsi Gabbard. In the last week alone, both have picked up healthy percentages and are now rapidly gaining ground on the front runners.

Tulsi Gabbard is spending quite a bit of time in Iowa, and her town hall meetings are beginning to grow substantially in comparison with Biden, who doesn’t even seem interested in showing up in the first in the nation-state.

Mayor Pete has been investing a good portion of his war-chest into Iowa television ads and is doing so during prime-time. Nary a day goes by that I don’t see Mayor Pete running ads during the evening news or the Wheel of Fortune.

Another big television ad buys candidate has been Tom Steyer. Steyer, the renegade billionaire from California, has been buying up large swaths of airtime, but when driving around the state, I can’t seem to locate one-yard sign on his behalf. This likely means that he has no ground game, which in Iowa means you will likely get pummeled the night of the caucuses. I can tell also tell you with great confidence, “if Styer has been to Iowa recently, it has been held in top-secrecy, because it certainly hasn’t been made public.”

Why is Iowa so Important:

Iowa is a cross-section of America. Iowa is purple for the most part. Iowa has a very large contingency of the senior population, plus Iowa has a substantial youth population as well. Social topics such as “gay-rights issues,” “Medicare for all,” and “free education” will be tested in Iowa as we have a reasonably large younger population here with the University of Iowa and Iowa State University. Des Moines is typically a cross-section of society, so it is a great testing ground for making adjustments to campaigns as the candidates go forward.

Because of the relatively low cost of advertising in Iowa, campaigns can test-market talking points and hone their “people” skills. Iowa is well known for being a “retail politics” state, meaning you had better be good at “gripping and grinning.” The truth about Iowa is that if you’re not good with people, you will likely be blown out by those who are. New Hampshire is almost identical with both people demographics and what they demand of a candidate to push them to the top of the pile.

If you put a gun to my head and made me make a prediction for the Iowa, New Hampshire, and South Carolina primaries, these would be my predictions as to the outcomes. Now everyone can begin debating!

Iowa: 1st place-Elizabeth Warren, 2nd place-Pete Buttigieg, 3rd place-a virtual tie between Bernie Sanders and Tulsi Gabbard. The reasons~ Elizabeth has a huge volunteer base ground-game, Pete is running and spending heavily in mass media, and both Bernie and Tulsi have good ground-games and are great on the stump. These factors play “Yugely” in Iowa.

New Hampshire: 1st place-Elizabeth Warren, 2nd place-Bernie Sanders, 3rd place-Tulsi Gabbard or Mayor Pete. The reasons~ Elizabeth is nearly in her backyard and she seems to be having more energy than Bernie and her message seems to be resonating to the left at a higher percentage than the grouchy old Vermont Senators. Tulsi and Pete; again, are doing great on the stump and seem to be gaining strength because their messaging is appealing to a wider swath of Democrat voters primarily because it isn’t off the charts to the left with as much “freebie” stuff.

South Carolina: This will be the deciding state as to “who goes on to Super-Tuesday” and who goes home. The likely winner of South Carolina will be most likely Joe Biden and believe it or not, if Tulsi can grab up enough campaign funding in the first two states because of some top-3 finishes, she could pose a threat to Biden. Elizabeth’s free-government for all will not play in this state and Mayor Pete’s gay marriage takes him out of the South. The South is simply to Christian based to accept or endorse such a relationship. Tulsi’s more moderate messaging along with Joe’s will be what play’s in these states. The other factor is the African-American Democrat base is (believe it or not), more moderate in terms of Democrat talking points.

President Trump faces two large hurdles to get past, then he strolls easily to victory.

Trump must first get past the impeachment issue. There is now zero doubt that the Democrats are going forward with impeachment. If the House does come with credible allegations, then all bets are off. He could likely be impeached and lose his Senate trial. Again; that is “IF” the Dem’s bring actual credible evidence that proves beyond a shadow of a doubt that the President is guilty of high crimes and misdemeanors. However, if the evidence is flimsy at best, then the Democrats have just committed political suicide.
Again, if and I do mean if the President punches past weeks and weeks of daily television news coverage of this impeachment being conducted by the Democrats, then he will waltz on to victory in November of 2020. The entire election in 2020 is coming down to “evidence.”

The entire 2020 election depends on “what evidence” is presented. At present, it is impossible to know the truth as both sides are spinning what has been testified too.

This entire re-election for the President will depend “what evidence” the Democrats can produce, and “which” party sells the evidence best to the American people. That is, assuming the President wins in the Senate trial.

By the time the Senate trial is over, if the Democrats have failed to prove overwhelmingly that the President is guilty of something substantial, then the American people will turn on the Democrats. The fact is, Trump can utterly destroy Biden, Buttigieg, Elizabeth Warren in a heads up contest. If by some bizarre circumstance that Hillary jumps back into this race, Trump will make her look foolish for even trying to do so. The fact is, the only chance the Democrats have is Tulsi Gabbard. Her youth, attractiveness, military service, and the fact that she has no skeletons in the closet would be their only chance.

But alas, like everything for the Democrats, Tulsi is not part of the approved “IN-CROWD,” and they won’t give her the nomination.

Get ready to dance America; Donald Trump will be your next President for four-more-years! 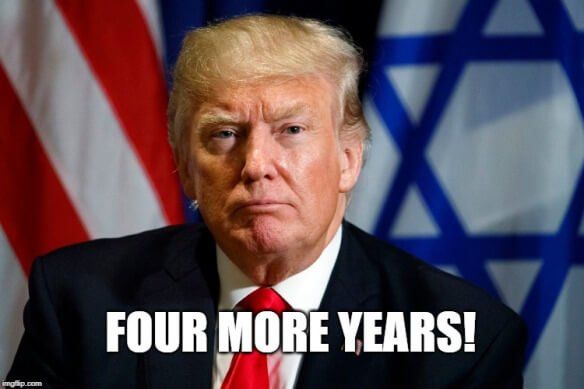