U.S. President Donald Trump kicked off his re-election campaign at a rally in Orlando, Florida, one of the swing states that fueled his poll-defying victory in 2016.

The crowd greeted him with “USA” chants as he recalled the “movement” he started four years ago. 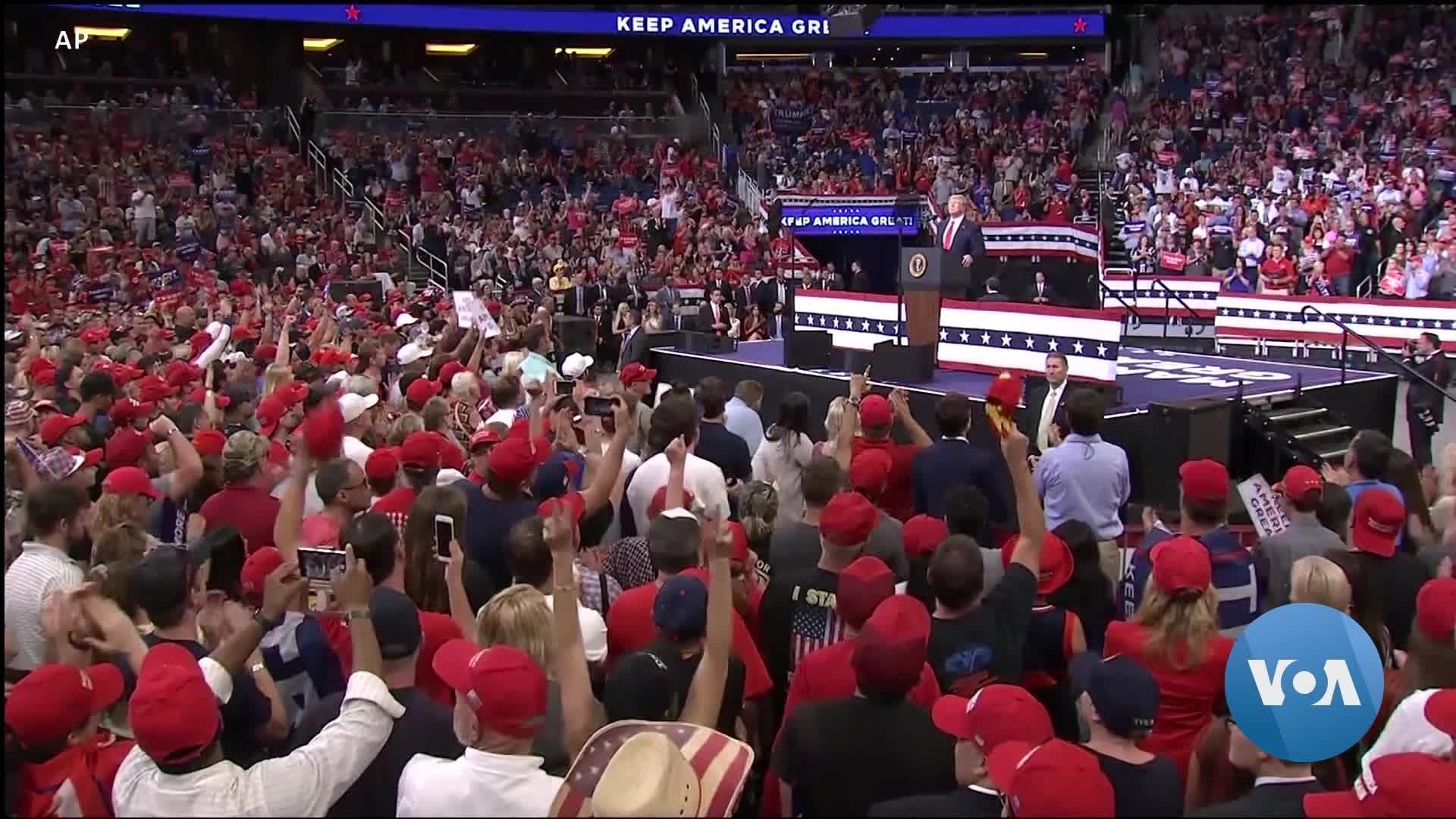 While promoting issues like the economy and border security, the president also condemned his Democratic opponents as "socialists" and "left-wing" extremists who have tried to destroy him and his family, and have "looked down" on his supporters.

The president promoted issues like border security and trade tariffs, and chastised the media and the Democrats for spotlighting the Russian issue and other controversies surrounding his presidency.

"Nobody has done what we have done in two-and-a-half years," he said.

"When he was a candidate in 2016. He promised a lot of things he was going to lead America back to world prominence. He was going to improve the economy. And he did exactly those things. The economy is booming. America is back to its rightful place as the leader of the free world. And the president is going to be running on keeping those promises," Murtaugh said.

From early afternoon, thousands of people have lined up to enter the 20,000-capacity venue. But many will have to watch outside on giant television screens under the downpour that has been drenching supporters and volunteers on and off all day.

Trump's most loyal fans have camped outside the Amway Center since early Monday to claim their spot in line. Monday night, several hundred were gathered a block away from the rally venue, with the first ones in line saying they have been there since 4 a.m. They brought tents, lawn chairs and coolers full of snacks and beverages, and plenty of umbrellas to protect against the elements, including a thunderstorm that lasted about an hour in the early evening.

Many of them say they support Trump’s economic and immigration policies.

Nathan Gunn, who will be voting for the first time in 2020, said he supports Trump’s America First agenda and loves what the president is doing with “the big crisis we have in the border with people flooding in.” Gunn also likes the fact that Trump is “not politically correct.”

“People don't really see what's really true about him, and that’s why they hate him,” Gunn said. “They don’t really see what he's capable of, what he’s actually doing for the country.”

Maureen Bailey from Volusia County and her twin sister Laureen arrived at 6 a.m. She said she is a lifelong Republican who prior to 2016 has always supported establishment candidates. Bailey used to think that Trump’s name-calling was “unnecessary” but now finds his controversial speech “refreshing.”

“He's just a breath of fresh air,” Bailey said. “He just gets up there and he goes off script. You just never know what's going to come out of his mouth.”

Thousands of people are already lined up in Orlando, some two days before tomorrow nights big Rally. Large Screens and food trucks will be there for those that can’t get into the 25,000 capacity arena. It will be a very exciting evening! Make America Great Again!

“It's night and day difference versus other cycles for the Republican Party,” he said, adding that it's normally difficult to get volunteers. “When you look at McCain (in) 2008 and Romney (in) 2012, we couldn't give away yard signs,” Ziegler said.

Not all who show up Tuesday will be supporters.

The Miami Chapter of the Democratic Hispanic Caucus of Florida and the Puerto Rican Democratic Club of Miami Dade have organized a “caravan” from Miami to Orlando to give the president the message that he is not welcomed.

The bus and the car caravan made stops in Palm Beach and Boca Raton, and eventually joined activists from various groups in an Orlando rally hours before the event. They say they are mobilizing to demand that Trump stop what they call “attacks on the Hispanic communities.”

Several of Trump’s former employees at his golf clubs in New York and New Jersey who were fired after revealing their undocumented status are also crashing his 2020 campaign kickoff.

Trump Org. undocumented ex-employees traveling to Orlando to Trump rally. They have a message for America. “We are good people who love America and deserve better. Together we make this country the greatest in the world” Get to work Congress! pic.twitter.com/ok0cImEWSo

With its 29 electoral college votes, Florida is one of the biggest swing states in the nation, and winning it is key. Republican pollster Whit Ayres called Florida “absolutely critical” for the president’s re-election prospects. “It's very difficult to put together the pieces to get 270 electoral votes without Florida's votes,” he said.

Trump won Florida by a margin on one percentage point in 2016, and his re-election launch specifically targets Central Florida, where Orlando is located. The region is strategic politically, given the fact that other parts of the state are either solidly Democrat or Republican. But Central Florida, where about half of the state’s registered voters live, is largely independent.

Orlando, the town most known as a tourist destination, home of Universal Studios and Sea World, is part of what is known as the I-4 corridor — the 214-kilometer-long interstate highway that goes from the eastern to the western part of Florida.

Linda Trocine, chairman of the Republican Party of Seminole County, one of the most densely populated suburbs of Orlando, leads a team of Trump volunteers in the area. She explained how the I-4 corridor is the swing part of the state and decides how the state will vote.

Trocine said that 2020 is different than 2016 because now there is “complete unity.”

“He’s trying to say that he cares about our communities when we know that's not true,” she said, adding that Trump continues to focus on his base voters.

Perez said that the Democratic Party are talking to voters about core Democratic values, including more funds for public education, affordable health care, protection for immigrant communities and minorities, including LGBTQ.

While Florida’s state legislators and governorship have been controlled by Republicans since the mid-'90s, in presidential elections, the state has flipped back and forth and usually by a very narrow margin. This includes the 2000 presidential race when George W. Bush was declared the winner over Democrat Al Gore by about 500 votes.

In the past 50 years, with the exception of Bill Clinton in 1992, the road to the White House has always included Florida.