By calling for the impeachment of U.S. President Donald Trump this week, former Vice President Joe Biden showed a new urgency to maintain his Democratic frontrunner status and respond to personal attacks against him and his family by the president.

From the start, Biden's candidacy for the 2020 Democratic presidential nomination largely rested on the argument he is the most electable candidate in a crowded field of Democrats.

But in light of revelations that Trump sought to enlist help from the Ukrainian president to dig up political dirt on Biden and his son, Hunter, Biden is making a new argument to voters that he will not allow the president to pick his Democratic opponent.

In a set of speeches in the early primary voting state of New Hampshire, Biden made the case that he was uniquely qualified to take on Trump.

"I said I was running to restore the soul of this nation," Biden said during a campaign event on Wednesday. "That is what is at stake in 2020. That's why this election is so important. And that's why we are not going to let Donald Trump pick the Democratic nominee for president. I'm not going to let him get away with this." 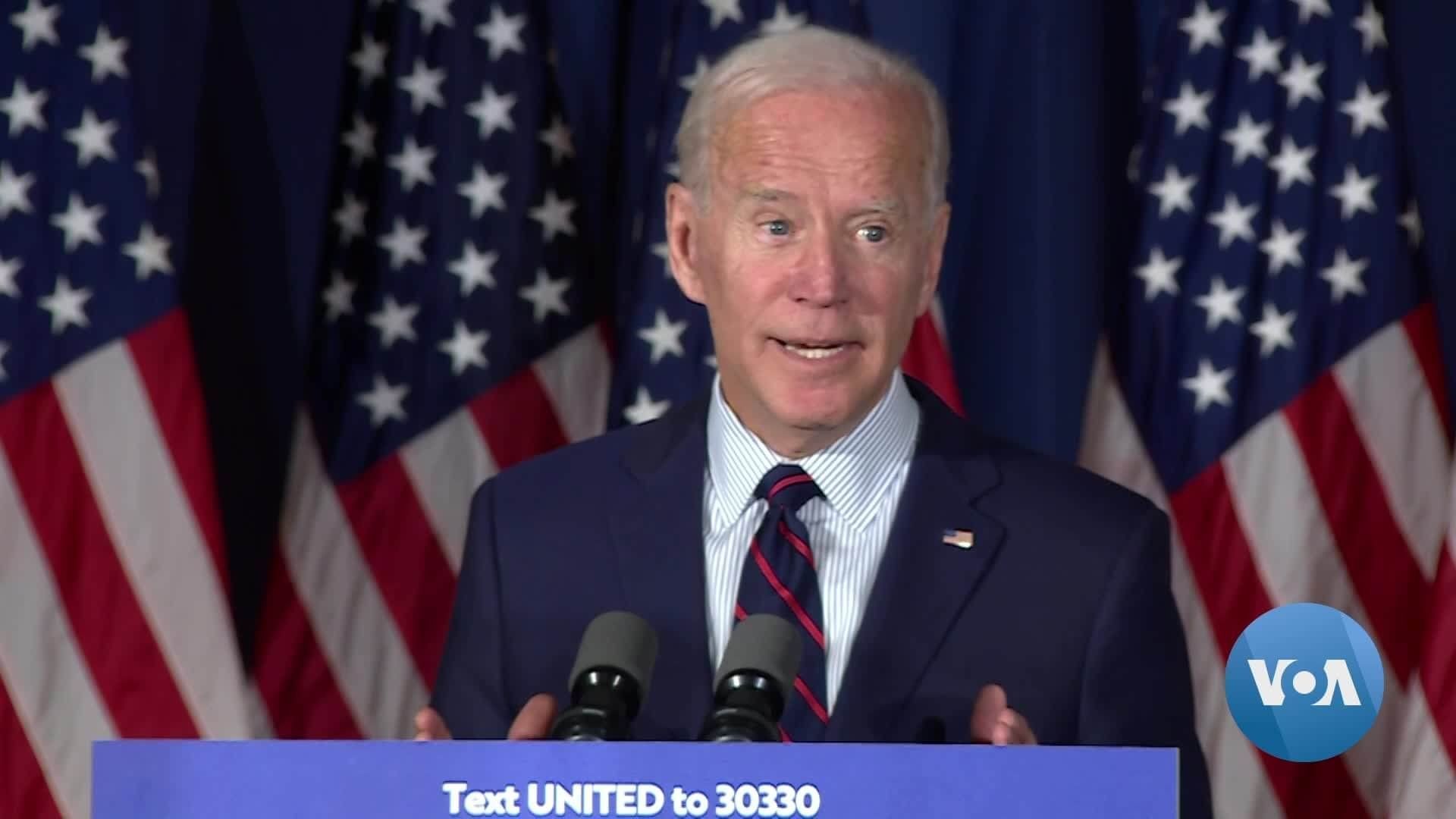 Earlier this year, Trump temporarily withheld nearly $400 million in aid to Ukraine at the same time he was pressing Ukrainian President Volodymyr Zelenskiy for assistance in obtaining damaging information about Hunter Biden's business dealings in Ukraine, while Joe Biden was vice president and serving as the Obama administration's point man on Ukraine policy. A government whistleblower's account of Trump's July 25 phone conversation with Zelenskiy prompted a House of Representatives impeachment inquiry into Trump's conduct.

"There is no truth in his charges and attacks against me. None. Zero," Biden told voters in speeches that largely departed from his signature campaign material to address the Trump controversy.

Even before the impeachment controversy erupted, the former vice president was facing challenges on the campaign trail. The 76-year-old politician invited speculation he is too old for the race after misremembering or incorrectly telling several stories illustrating his policy positions. He also faces a wide field of Democrats who offer progressive voters more attractive options than his own centrist policy positions. While Biden leads in some polls, Massachusetts Senator Elizabeth Warren, a favorite of liberals, is edging closer or in some cases outpacing him.

According to the RealClearPolitics averages of recent polls, Biden barely leads Warren among likely voters, 27.8 percent to 26 percent. Moreover, Biden has been trailing Warren and Senator Bernie Sanders of Vermont in fundraising.

But Biden energized crowds of voters in New Hampshire this week, declaring that Trump "picked the wrong guy to fight."

Biden's call for Trump's impeachment and dire warnings about a crisis looming over American democracy were well received by voters who turned out to see him.

"Today is the first day I got emotional," Marsha Miller, a retired voter who described herself as a very involved and worried Democrat. "There were no gimmicks. There were no wild promises. There was just an honest appraisal as to where we're at and where we need to be. Hope. He provided hope."

With four months to go until the first in the nation New Hampshire primary, Miller said she is "real close to [voting for] Joe Biden. I thought he spoke the truth."

Cathy Robertson Souter, a freelance marketer and writer who describes herself as an independent voter in New Hampshire, said Biden was the third candidate she's seen in person this primary season. While she remains undecided as to who will win her primary vote, Souter said Biden addressed her concerns about Trump's threats to expose and punish the whistleblower.

"I liked that he stood right up and talked about what's going on now," Souter said of Biden. "He's really talking about how we can't let this happen to our country."

Biden also made inroads with Randy Neukam, a self-described progressive voter who said he wasn't usually attracted to centrist candidates. He was drawn in by the new portions of Biden's speech laying out the strengths of American democracy and the ways it is being threatened by Trump's actions.

"He makes me think politics could be vigorous and engaging and people could talk across the spectrum to each other he's that kind of guy. I don't know if I'm for him but I hear myself saying I'm for him," Neukam said.

But Biden's events in the southern part of the state also drew a small but committed group of Trump supporters. They argue that as a former senator and vice president, Biden has had his own share of unethical dealings with foreign leaders.

"He should be ashamed of himself with the shenanigans that he's been involved with over the years to try to point the finger at the president for things that are in the course of his responsibilities, I think are absolutely ludicrous," said Lou Gargiulo, a vice chair for Trump New Hampshire.

In a Trump campaign ad running now on local TV stations in New Hampshire, Biden is accused of boasting about forcing the firing of a Ukrainian prosecutor who was investigating a Ukrainian natural gas company that employed his son, Hunter. The former vice president unequivocally denied those charges in both speeches to New Hampshire voters, noting the removal was the official policy of the U.S. government and supported by the international community.

"What Trump did in Ukraine was to carry out a secret policyfor his own personal political benefit," Biden said.

For many Trump voters, the president's Ukraine phone call was in keeping with his broader message of addressing corruption internationally and not enlisting foreign support for his reelection campaign.

Chau Kelley of Vietnamese-Americans for Trump said "President Trump did the right thing drain the swamp. Those people benefit their personal pockets because they are selling out our interests."

Biden pivoted back to key economic and social policy issues at the end of each of his New Hampshire speeches. But for many voters, the 2020 election is shaping up as a broader discussion about the core values of democratic institutions and the rules of political discourse.

"We can't just beat Donald Trump," Biden says to close his rallies. "We need to beat him like a drum."