When you “sell-out” American Airlines Center or Target Center or any other major sporting complex, it is a big deal.

It will usually take a Garth Brooks, the Rolling Stones, Fleetwood Mac, or some other major super-star to accomplish this task. In other words, very few rock stars and country stars can pull off “sell-outs” on a repeated basis at EVERY event they hold. Yet, a politician known as President Donald J. Trump has accomplished this anomaly. He has indeed become the Mick Jagger or Elton John of politics.

Who stands in line for 4-5-10 and in some cases 24-hours to listen to an hour and a half long political speech? Vermont Senator Bernie Sanders has had some rather massive rallies recently and going back to the 2016 race, but nothing was approaching what President Trump has managed to garner.

In fact, Trump was holding rallies at major sporting complexes back in 2016 that had 25-30,000 rabid well-wishers. One rally that I remember quite well was one he held just before the election in Alabama. That rally was so large, the campaign had to hold it at a college football stadium that held somewhere around 45-50,000 fans, and it was sold-out. 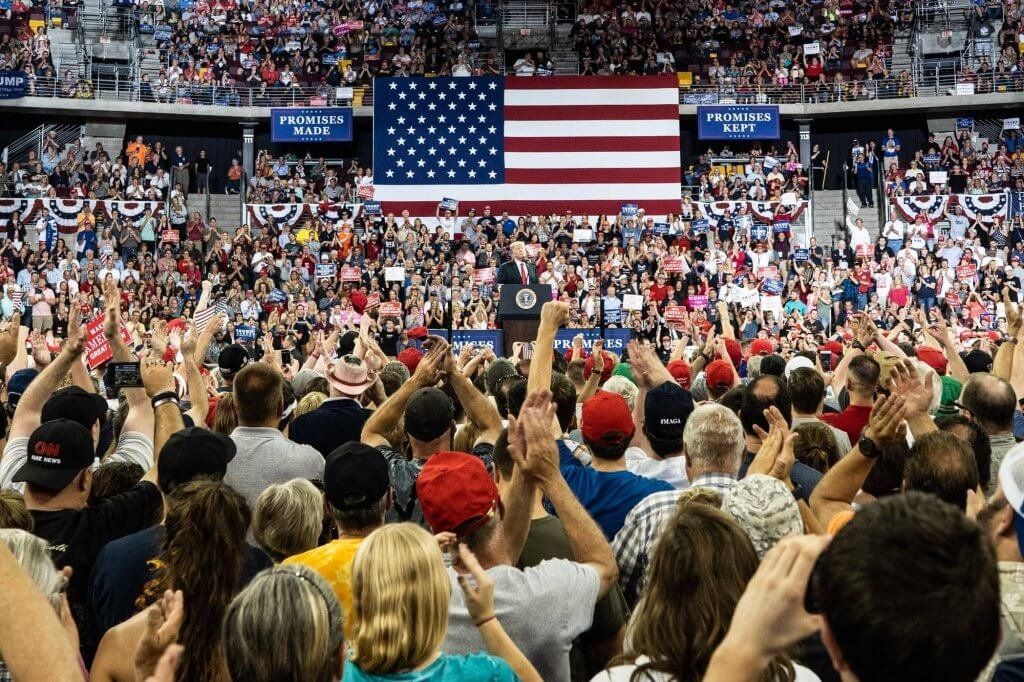 For the full effect of the Trump enthusiasm, here is his entire event in Minneapolis two-days ago.

It is now evident that Trump’s rallies are not political in nature. Political rallies typically have a much smaller audience; then you are forced to listen to some politician drone on about macroeconomics, or some other boring type of topic. The verbiage “military-industrial-complex,” and “Chase” are often thrown in to cause you to discredit “those evil politicians on Capitol Hill,” then it is laced with acronyms such as “PACs or Super-PACs.” In other words, the politician is often speaking “political-ease” and putting the crowd to sleep. Not at a Trump rally!

President Trump has managed to turn what would be considered a boring event into a cultural phenomenon. How did he manage to cause such waves across this land?

It’s relatively simple actually when you take a closer look at (will now be historical) his campaign style.

It begins with the rhetoric. Again, most politicians are polite in nature, use Harvard based phrasing and words, and speak as though they were using their one-minute on the floor of the Senate to make a point. Not Trump! Trump speaks to the truck-driver, the plumber, the bakery worker, and the nurse.

In other words, he speaks to the average middle-class American, and he uses everyday verbiage that we use in our daily lives. He doesn’t soft-peddle issues, he hits you between the eyes on topics that actually concern us, and he does it with language that we understand.

Donald Trump is genuinely a blue-collar billionaire who understands the plight, issues, and concerns of the average American citizen. On top of all that, he attacks those that we are unable to attack, such as the mainstream media. To prove a point, when would we ever have the opportunity to tell former Vice-President Biden that he was an ass-kisser for Obama and accomplished nothing as Veep? Never is the answer.

To explain Trump’s popularity, one has to consider the topics he is talking about, and then you have to consider how he explains them to the populace. And the fact is, they resonate, and it is because of the delivery of the topic. Again, it is not with smooth political double-talk, it is in your face, brash, and with very little polish.

Would you ever hear an elected politician speak this way about an elected official? Not no, but heck no, and it’s because of the possible backlash that politician would face. They simply don’t have the brass-b***s needed to say this stuff.

I believe it is safe to say that America has never had a President that had the courage to stand up to NBC, ABC, CBS, and the rest of the alphabet media. Not only does this President say what we are thinking, he attacks them for what they are. This is usually done with a great deal of joyous clapping by the crowd when he does this.

Will we ever see another President with the Godzilla like presence that this President has in front of these size of crowds? It is doubtful. President Trump is without question a once in a lifetime event. He has truly become the Elvis of politics. This one man is single handedly changing the course of politics as we have known it in America. Personally speaking, I think it is for the better.

President Trump has ripped away the green curtain — so we are now getting a full-frontal assault, and America is loving it.

Alabama Clinic Open Despite State’s Near Total Ban on AbortionNext PostTurkey Says It’s Advancing in Syria; Trump Says He’s an ‘Island of One’