Sheriff David Clarke:
“Well, that’s typical of the phony nature of these individuals. Look, he’s an elitist. He’s at Martha’s Vineyard while American people are suffering down in Louisiana. I’ll tell you, it just made my stomach sick to see what those people are enduring. But, they’re strong down there. They’re resilient down there in Louisiana as most Americans are across the United States. They didn’t wait around for him to do anything and like you said, he was pressured to go down there. So, he’ll do the obligatory thing now that the vacation is over. He’ll do the photo-op. He’ll hug a couple of people and get back on Air Force One and go about his day. Look, the Black Lives Matter, they don’t care about black lives, they don’t care about anybody’s life. They only care about political power. This George Soros-funded operation has exploited people for purely political power. I am not shocked. I unmasked these people several years ago including on your program. I told you this was a political construct and it had nothing to do with black lives. This was an organized effort for the 2016 election to mobilize black votes.” 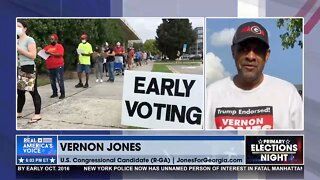