With Senator Elizabeth Warren and Mayor Pete Butt-edge-edge surging in Iowa and New Hampshire, it is rapidly becoming clear who the Democrat’s are beginning to gel behind. 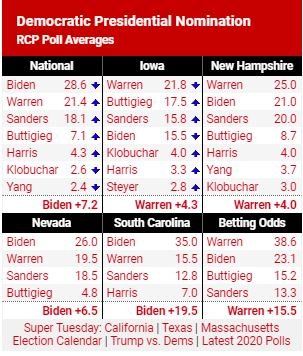 The contrast between these two Democrats also seems to be gelling. While Mayor Pete appears to be a bit more moderate, Warren is, of course, off the charts to the left, pushing her socialist policies. The party seems to be splitting down ideological lines. The more moderate Democrats are drifting toward Mayor Pete and Congresswoman Tulsi Gabbard, while the more radical left (who desire socialism) are gravitating behind Elizabeth Warren and her message of the government taking over our lives.

While Mayor Pete and Gabbard want to “massage and tweak” Obamacare and allow the American people to keep their healthcare if they like it, Warren wants the government to take over all healthcare and create a one shoe fits all approach.

This “Medicare for All” approach by Warren now seems to be what she is hanging her presidential hopes on.

Warren has even gone so far (with the recent release of her plan) as to claim that the middle-class would not have their taxes raised. According to most economists, the math simply doesn’t work out to validate her claims. If she doesn’t raise taxes on the middle-class, then the government is having some $17-Trillion added to our debt. In addition to this bad news, EVERY AMERICA will lose their private insurance and be added to a government medicare plan.

Senator Warren’s other Achilles heel will be her almost “Obsessive Compulsive” desire to “punish the super-wealthy” in our country. Most Americans are beginning to realize that you do not get a paycheck from a poor person. Even Mayor Pete and Gabbard are talking this up on the trail in Iowa.

The most humorous part of Warren’s campaign is; most Democrats know full well that the chances of her being able to push a plan such as her medicare for all through Congress and the Senate is virtually impossible. This begs the question, “why is she hanging all her hopes on this ridiculous plan?“

While the above video is a little over a month old, Mayor Pete has not changed his position in Iowa as he has campaigned across the state.

He is claiming that his plan would allow people to keep what they have, or they would have the option to “opt-in” to the new program.

In either case, the problems for the Democrats begin and end with taxes. The truth is, we as American voters have heard this dog and pony show many, many times before. The old adage, you cannot teach an old dog new tricks, doesn’t seem to apply to this crop of Democrats. The Democrats seem to think still that you can campaign on raising taxes, and the American people will blindly support this campaign rhetoric.

The reality is, our nation knows that we cannot afford what the front-runners are trying to sell. Even Joe Biden has punched holes in Warren’s plan.

The problem for the Democrats has become obvious.

THEY HAVE NOTHING TO CAMPAIGN ON!

Generally, in a Presidential cycle, the opposing candidate can usually find something economical to bash the sitting President about. They can find a war, bringing troops home or something to do with a character flaw. The reality is, the economy is doing great, Trump has announced the troops are coming home from Afghanistan, and so far, we have no blue dress issues in the Oval Office.

Granted, healthcare cost in our nation is an issue. Prescription drug cost is also a problem. However, the administration does a “Blue Ribbon” panel working on these issues. Will healthcare be the lightning bolt the Democrats have that can win back the White House? Most likely not.

Americans have always voted with their wallets for President. Even when former President Clinton was officially impeached for felony charges, they still supported him because the economy was doing well.

If Elizabeth Warren does happen to win the nomination, expect Trump to destroy her “Medicare for All” plan, much like a steak knife slicing warm butter. He will decimate her with facts, figures, and simple math. As for Mayor Pete, he will not win the South in the primary because of his openly gay marriage; this will take his candidacy down the drain.

Between Biden’s campaign trail “misspeaks” and his apparent struggle with energy and age, he is not going much past New Hampshire or South Carolina. This leaves Tulsi Gabbard. Can she do well enough in Iowa and New Hampshire to have a massive campaign cash infusion? Her ground game is struggling in Iowa. While she has one, it is not where it needs to be in terms of volunteers and paid staff. Where ever she goes, she is met with enthusiasm; she is lacking in people to knock doors, put out yard signs, and all the rest.

In the end, Elizabeth Warren will not survive her unbelievable leftist approach to healthcare, not to mention the free college, free VW Rabbit, free phones, DVDs, and everything else she is promising.