U.S. Justice Department’s inspector general said Wednesday that his recent finding that the FBI’s investigation of the Trump campaign in 2016 was not politically motivated and does not “vindicate” any official.

Michael Horowitz released a 417-page report Monday on the FBI investigation, stating that while he had uncovered significant irregularities in the FBI’s surveillance of a former Trump campaign aide, he found no evidence of political bias.

The findings were seen as a rebuttal to President Donald Trump’s and his Republican allies’ repeated claim that the FBI conducted an illegal “witch hunt” to bring him down.

Former FBI Director James Comey, who led the investigation until Trump fired him in May 2017, wrote this week that “the truth is finally out” and “those who attacked the FBI for two years should admit they were wrong.”

Asked by Committee Chairman Lindsey Graham whether the report “vindicates” Comey, Horowitz said. “I think the activities we found don’t vindicate anybody who touched this.”

Trump asserted that the report confirmed an “attempted overthrow” of the government far worse than he had ever thought possible. He later criticized FBI Director Christopher Wray for saying in an interview with ABC News that the investigation “was opened with appropriate predication and authorization.” Wray also noted Horowitz found the FBI made numerous mistakes during its inquiry.

“I don’t know what report the current Director of the FBI Christopher Wray was reading, but I’m sure it wasn’t the one given to me,” Trump tweeted. “With that kind of attitude, he will never be able to fix the FBI, which is badly broken despite having some of the greatest men & women working there!”

U.S. Attorney General William Barr repeated in an interview with NBC News correspondent Pete Williams that aired Tuesday his belief that the FBI may have acted in “bad faith” when it conducted the probe into whether Trump’s campaign conspired with Russia.

“I think our nation was turned on its head for three years based on a completely bogus narrative that was largely fanned and hyped by a completely irresponsible press,” Barr said. “I think there were gross abuses … and inexplicable behavior that is intolerable in the FBI.”

The attorney general’s remarks will likely intensify the controversy about whether he himself is acting in good faith, or acting as a Trump sycophant.

Horowitz said in the report the FBI was justified in opening an investigation in 2016 into suspected ties between Trump’s election campaign and Russia, saying there was a reasonable basis to authorize an inquiry.

Although Horowitz scrutinized a million documents and interviewed more than 100 witnesses, Barr insisted the inspector general made minimal effort to find evidence, and simply accepted the FBI’s findings.

“All he said was, ‘People gave me an explanation, and I didn’t find anything to contradict it,'” Barr said of Horowitz.

The long-anticipated report contradicted some of Trump’s and his Republican allies’ most damning assertions about the investigation, such as the charge that senior FBI officials were motivated by political bias against Trump. The FBI investigation, dubbed Crossfire Hurricane, was subsequently taken over by special counsel Robert Mueller.

Horowitz sharply criticized the FBI for a series of “significant inaccuracies and omissions” in obtaining authorization from the Foreign Intelligence Surveillance Court to surveil Carter Page, a former Trump campaign adviser suspected of ties to Russian intelligence.

In one glaring omission, the FBI failed to disclose from the court and the Justice Department that Page had been approved as an “operational contact” for the CIA and had told the spy agency about his contacts with Russian intelligence officers, according to the report.

The investigation was launched months before the Page surveillance began and was based on well-founded suspicions about links between Trump campaign operatives and Russia, according to the report.

“We … concluded that … the FBI had an authorized purpose when it opened Crossfire Hurricane to obtain information about, or protect against, a national security threat or federal crime, even though the investigation also had the potential to impact constitutionally protected activity,” Horowitz wrote.

Barr has ordered a separate internal probe into its origins after rejecting the IG’s finding that there was sufficient basis for opening the investigation.

Wray ordered a series of more than 40 corrective steps in response to the inspector general report.

“The FBI has some work to do, and we are committed to building on the lessons we learn today to make sure that we can do better tomorrow,” an FBI spokesperson said in a statement.

The FBI launched its investigation in July 2016 after receiving a tip that the Russian government was considering helping the Trump campaign by releasing damaging information about Democratic candidate Hillary Clinton in the form of thousands of emails stolen from the Democratic National Committee.

Graham said the FBI’s surveillance of Page amounted to a “a massive criminal conspiracy to defraud” the FISA court.

“I have serious concerns about whether the FISA court can continue unless there is fundamental reform,” Graham said. 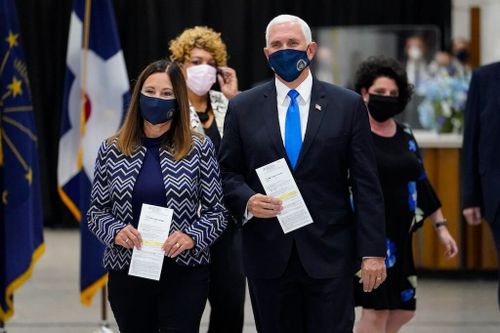