Confession; Yes, up until just recently, I too was in denial about climate change. It wasn't so much that I was in denial about the earth actually warming; my denial came from the attacks on humanity being the cause of our significant warming over the past several decades.

More specifically, my denial came or was rooted in the argument that the United States is or was somehow responsible for the plight of our planet earth. Remember when the Olympics was held in China a few years back? I vividly remember a segment being done on NBC Sports about what China had to do in order for the athletes to show up and perform.

Beijing and Shanghai were so polluted that the nation's government forced all cars, trucks, and anything that emitted pollution to shut down for weeks leading up to the Olympics just so the air was clean enough for the athletes to perform. That is how bad the air quality is in many cities in China.

Beijing, China, is arguably one of the most polluted cities on the planet.

The nation of India is not any better. India's rise in becoming an economic powerhouse has not been without its contribution to carbon being pumped at alarming rates into our atmosphere either. India is not just an air polluter, but that nation is devastating to the environment as a whole with their seeming inability to find a trash can to toss their trash in.

They seem to want to use their rivers and lakes to store their trash.  Mexico is another major contributor to air pollution. For whatever reason, over the past several decades, Mexico has not wanted to force its citizens to use any type of catalytic converter on their automobiles. Cities such as Juarez and Mexico City have horrible air quality, with many of their cars and trucks pouring choking amounts of smog into the air. Unfortunately for America, this smog doesn't stop at the Rio Grande River. Simply look at the City of El Paso as an example. 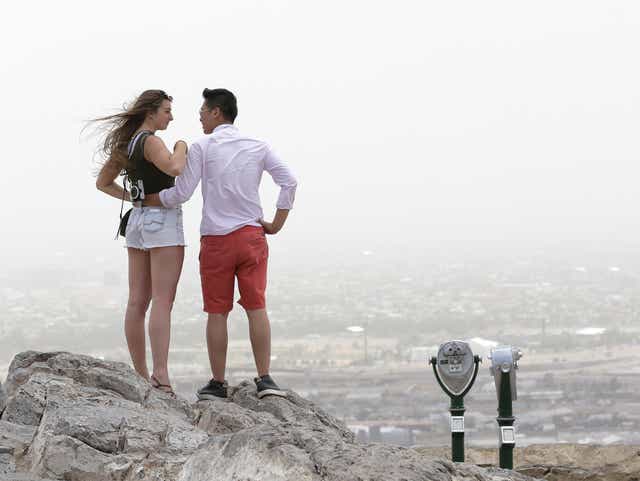 Looking South toward Juarez, Mexico, from one of the parking areas on the El Paso side of the border.

Considering that 'of the top 50 worst polluted cities' on the planet are in India, Pakistan, and China, why is it the responsibility of the United States to punish our taxpayers to "clean up" the world when we aren't the largest polluters?   Knowing that Joe Biden is all but owned by the Environmentalist Lobbyists and the Green New Deal factions, Congress has developed something known as HR3684. Biden and company (meaning the radical left) are touting this atrocity as the "end-all-be-all" answer to several of America's issues.

The first being the economic recovery from the pandemic. Through this "infrastructure legislation," the United States will pump hundreds and hundreds of billions of dollars into the economy and supposedly create millions of jobs.  These jobs supposedly transform America's infrastructure from the current "polluting" infrastructure to a "Green" infrastructure. In the bill are plans for spending hundreds of billions for "electrifying" our train track grid, building thousands of charging stations across the tens of thousands of miles of Interstate highway system (which will now become toll roads) and reinforcing thousands of bridges (which are apparently about to collapse according to Joe).

If you'll remember, under the original "Green New Plan" submitted by Representative Alexandria Ocasio-Cortez (AOC) of New York, most of Biden's Infrastructure plan dovetails almost identically with her plans for our future.  The trains would become high-speed electric (much like in Japan) and would begin replacing most air travel. With that said, imagine now getting a phone call that you must attend a meeting in Denver, Colorado, tomorrow afternoon. You're currently sitting in New York City. Choice number one; fly and be there in 3-hours. However, under Joe and AOC's plan, you take a train that forces you to now invest some 20-hours, and that's a big "if" you can even get a direct train ride to Denver from New York City.  As most old-sages will tell you about life, "follow the money" for the real answer to almost any issue. In this case, the money should be followed.  Currently, Joe Biden is shutting down the fossil fuel industry.

He's doing so under the guises of "saving us from global warming."  This we know for a certainty. If we go all-electric for our transportation needs, tens of thousands of charging stations will need to be built. Secondly, the most important question needs to be answered, "where is the electricity going to come from?"  In excess of 90% of our electricity currently is being supplied by "coal-fired" electric plants. We have scrapped nuclear, and wind farms cannot produce enough electricity to supply our nation with its needs. Now we are back to "follow the money." Across the Mid-West United States, you can find tens of thousands of wind turbines.

The bulk of these is owned by Mid-American Energy. You get three guesses who owns MidAmerican? Answer; Mr. Warren Buffett himself. He is getting paid by the government to set up these thousands of wind turbines (which are made in Germany and China), and he is using precious land that grows crops to plant these eyesores on. That's right, America, your taxpayer dollars are paying Warren Buffett to build giant windmills, which he then creates electricity then sells it back to you.  The fact is, it takes more energy and creates more greenhouse gas to produce the electricity that these new modern gasoline-consuming automobiles put out. A Chevrolet (small SUV) or a Toyota Corolla gets some 30 miles per gallon and pollutes far less than most any auto manufactured globally.

This now begs the question; Why are we about to punish the American people by hanging hundreds of billions in more debt around their collective necks. Why are we about to turn our entire economy on its head, force Americans to alter their lifestyles they have been accustomed to for decades to implement something that will harm us in the future?  The benefits of doing this do not outweigh the costs. Until the rest of the world gets on board and is willing to participate, we are spinning our wheels.

The Origins of the Dept. of Homeland Security’s Disinformation Board

Biden Admin Releases Record Number of Illegals into the U.S.