It's a routine sight on the Illinois River: towboats slowly pushing barges carrying everything from salt and petroleum to corn and soybeans, the top commodities produced in the state.

"This is the backbone of our economy," said Tom Heinold, chief of the operations division for the U.S. Army Corps of Engineers Rock Island District. "Here in the upper Midwest, we feed the world from right here."

Heinold oversees Corps of Engineers facilities along the Illinois River, including the Starved Rock Lock and Dam near Utica. The National Waterways Foundation says the statewide system moves more than 83 million tons of freight annually, worth more than $13 billion to the U.S. economy.

Using barges to transport goods on rivers is not only efficient but also environmentally friendly, reducing the need to use petroleum-guzzling trucks, Heinold said.

"We can take 1,000 tractor-trailer trucks' worth of commodities and put them on a single 15-ton barge tow," he told VOA. "If it's big, bulk, it's more efficient to go on the rivers. So we see the benefits of that, that cost savings over roads and rails."

But the locks, which rise and fall to allow barges to navigate a consistent depth of the river, were built nearly a century ago and are showing their age.

"It is literally, in places, crumbling," Heinold said while peering from a balcony overlooking the lock and dam. "You can see the concrete right in front of you, deteriorating. On the vertical walls, you can see the corner armor rusting. Some of it is bent."

"They were built with a 50-year design life," explained Rodney Weinzierl, a farmer in central Illinois, where the waterways are key to getting crops to foreign buyers. Weinzierl serves as executive director of the Illinois Corn Growers Association, which advocates for improving the country's inland waterway system.

"Exports are very important to Illinois and the U.S., and infrastructure is what keeps us competitive with foreign competition," Weinzierl said. But since most taxpayers rarely engage with this part of the country's infrastructure, he said, the waterways often get overlooked.

"The public just never really sees it," he told VOA. "It's much lower on the list of awareness of infrastructure that's really helped make our nation what it is today."

Weinzierl says it's crucial to improve the locks and dams so they don't become unusable, which would impact the flow of grains and other goods — as well as the prices of those goods.

But for Heinold to be able to keep things running, the system "needs some help to be reliable and safe," he told VOA.

Both President Joe Biden's $1.7 trillion infrastructure plan and a Republican counterproposal would invest in the country's inland waterways and ports.

Previous funding allowed Heinold to oversee upgrades to the Starved Rock Lock and Dam in 2020, which closed the river to all traffic for several months. Heinold says more work is needed throughout the system, and Weinzierl understands it isn't cheap.

"Each one of these projects are several hundred million dollars," Weinzierl explained, and he hopes enough money is allocated to perform upgrades to at least two locks along the Illinois River in the greatest need of repair.

"These are long-term investments," Weinzierl said. "The [U.S.] House [of Representatives] last year actually passed out of committee a bill to put more money in the river system, which is the first that happened in several decades. So we felt good that if there was going to be an infrastructure package that rivers were going to be a part, and we're pleased to see that it was a part."

Heinold says he already has a list of what he would do with an infusion of funding.

"It's not that we have it spent before it gets here, but we know exactly what our capabilities are and where the funding needs to go," he said.

Kamala Harris Set to Head to Mexico, GuatemalaNext videoTrump wonders why Biden thought it was a good idea to cancel the Keystone XL Pipeline 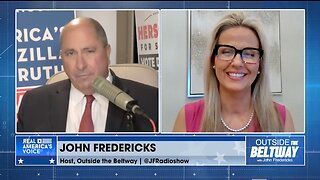