The television network NBC has to be in near convulsions. There is virtually no way on earth that their advertisers can be happy about how the Olympic viewership numbers are trending.

After the 2020 Tokyo Olympic games had been suspended last year from the widespread COVID pandemic, this year was supposed to be a year of celebration for the athletes, nations, fans, and of course, the billions who were supposed to watch the games on television. Apparently, none of the above is panning out the way anybody anticipated.

None of the above has panned out how the network, the advertisers, or the Olympic Committee had hoped for. Whether in opposition to the rules or just plain old obstinance, it seems that Megan Rapinoe (U.S. Olympic ladies soccer team) decided to push her personal beliefs on the world from virtually the opening day. In the face of everyone, including most of our nation, she knelt during the opening anthem in America's first team competition. 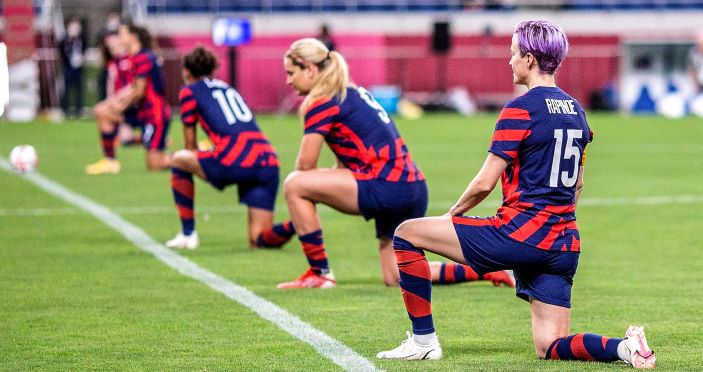 Rapinoe has infuriated the American people with her actions despite the Olympic Committee and her nation's desires.

One of Rapinoe's largest sponsors is Subway Sandwiches which has been facing horrendous backlash on social media since her actions on the field. While Subway has yet to comment, it is pretty safe to say that they will be dropping her in the coming weeks to hopefully stop the economic bleeding they are currently incurring.

NBC's expenditure of some $7.75 billion for the televising rights is likely to end up being a horrible investment largely due to Rapinoe and gang who arbitrarily decided to display their political beliefs at "what is supposed to be" is a non-political global endeavor.

If Megan Rapinoe had visions in her sleep of coming home to a hero's welcome (if social media is any indication), she will be sorely disappointed. Not to mention her bank account.