How times have changed in our nation. Once upon a time, yes, America hated losing a war.  Under President Roosevelt, Generals and Admirals were given a task. "Go defeat Adolf Hitler was the order." Then, Generals Eisenhower, Bradley, Patton, Smith, and more went to work, and we know the results. Adolf Hitler was soundly defeated, the Nazi regime crumbled, nations were freed from tyranny, and a new Europe was formed.  Since WWII, it seems politicians have taken over the prosecution of America's conflicts.

President Truman could only muster a cease-fire with the Korean Conflict. President Nixon would have us leave with honor in Vietnam (when in reality, we lost that war). Now we have multiple Presidents who have spent 20-years nearly 7,000 dead American troops, with over 20,000 being wounded and over 500,000 civilian lives in a war on terror in Iraq and Afghanistan.  Has Afghanistan become President Joe Biden's Vietnam? It is certainly beginning to appear that way, and for multiple reasons.

Modern-day politicians seem to think that America will not back a war that we get involved in. This mode of thinking is what has caused us to be humiliated in our past several conflicts. America will support a war if the "cause is just" and we "actually want to win the war, no matter where it is." The fact is, had America gone to Vietnam and the soldiers, sailors, and Airmen been allowed actually to win, we would have gone in, cleaned house, came home, and we would not have had a 10,000-day war and lost over 50,000 of America's treasure.  The same holds true in Iraq and Afghanistan.

To prove just how inept this White House is, Biden began pulling the troops back a few short weeks ago, and the Taliban as of today has seized nearly the entire nation. In fact, the Taliban has been so emboldened that they have now surrounded the Capital City of Kabul after having taken one of the nation's largest cities, Kandahar. House Minority Leader delivered via Twitter some rather strong words for the Administration today. 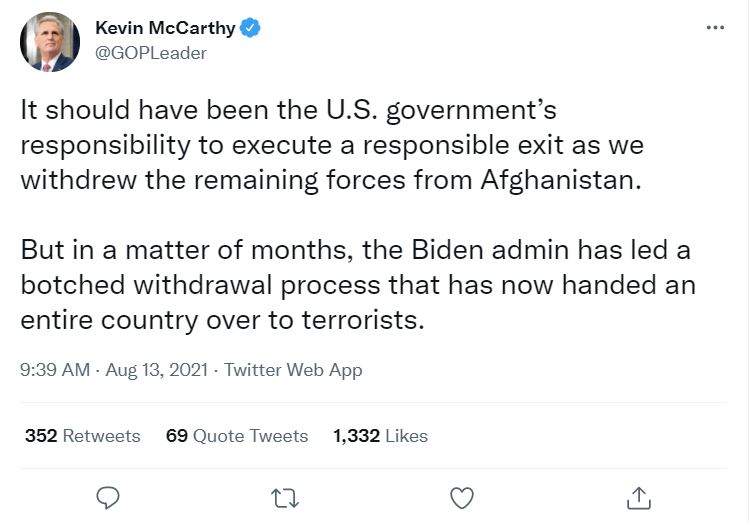 There is no disputing that Joe Biden has just handed millions of innocent people over to tyrannical religious zealots. The fear now should be for the West, what happens when Iran goes nuclear, now it is time to be very afraid. In the end, all of the blood, all of the treasure, all of the money went for nothing because of this President. Think about it!

WATCH Frank Gaffney discuss the dangers America faces from the Taliban and other adversaries due to Biden’s withdrawal from Afghanistan, with America's Voice AM host, Jessica Rivera.

"What's at stake for the United States when we end an endless war unilaterally, and the other side doesn't give up?" Frank Gaffney warns about emboldening our adversaries. Learn more about the US Afghanistan policy in his interview with guest host, Amanda Head on the "Outside The Beltway" show.

Over a month ago, President Joe Biden told the American citizenry that the Taliban would not take over Afghanistan after he ordered the removal of U.S.