The impeachment inquiry into allegations President Donald Trump sought to pressure Ukraine was the dominant focus Wednesday in Washington and the first topic on the agenda Wednesday night as Democrats competing to be the party’s nominee in the 2020 election squared off in their latest debate in Atlanta.

Those on the stage stood united in their support for the impeachment probe and their opposition to the president they each hope will be their opponent when voters across the country go to the polls a year from now. 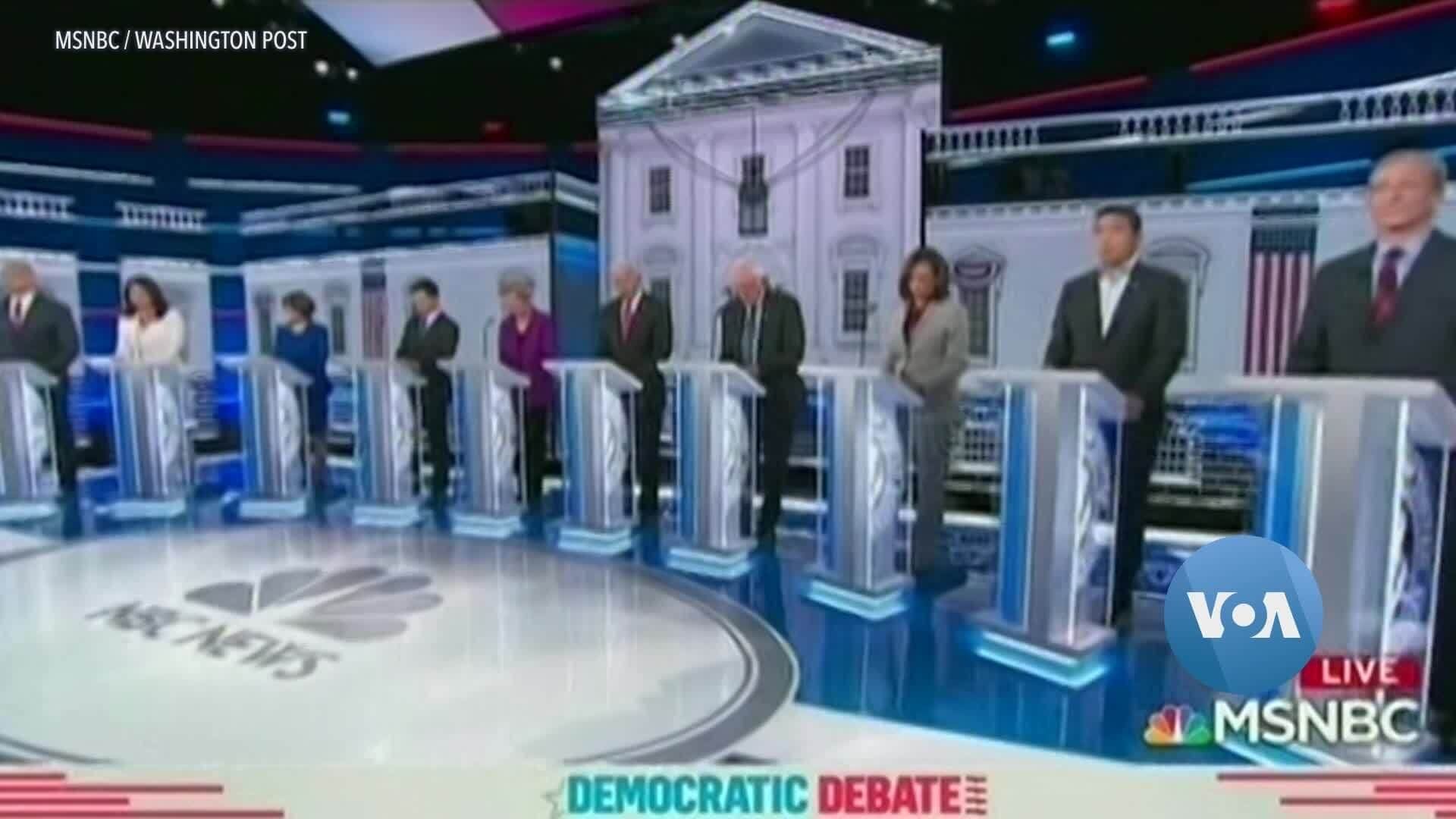 That spirit marked much of the debate, with candidates spending less time than in previous debates going after each other while highlighting the policy positions on which they largely agree.

Senator Bernie Sanders called Trump perhaps the most corrupt president in modern U.S. history, but cautioned against making opposition to Trump the sole focus in the push to defeat the president at the polls. He pointed to economic challenges faced by those who lack health insurance or housing, and the “existential crisis” of climate change as he said the government can take on both of those and investigating Trump.

Senator Elizabeth Warren cited the earlier probe by special counsel Robert Mueller, who looked into Russian meddling in the presidential election in 2016 and whether Trump sought to obstruct the probe once he was in office. Warren said a lack of congressional action on that matter emboldened Trump in the current scandal, in which he is facing allegations he sought to pressure Ukraine to investigate former Vice President Joe Biden, a leading political rival.

Biden said, if elected president, he would not interfere with the Justice Department in considering whether to investigate Trump for any potential criminal charges, leaving that decision up to the independent determination of the attorney general. Biden also expressed the need for a “return to civility” and uniting the country, as he rejected recent instances of crowds chanting, “Lock him up,” in reference to Trump and his often-cheered “Lock her up” chants at his political rallies.

Senator Cory Booker also supported the idea of the next president being someone who brings the nation together, but he said that was not to have some sort of nice moment among the American people, but rather to work together to achieve “great things.”

Candidates across the stage faulted Trump’s approach to foreign policy as turning away from traditional allies and acting as an unreliable partner.

Biden said, as president, he would go back and make sure the United States had the alliances it had before Trump became president, including the Paris climate treaty. Biden called climate change “the number one existential threat to the world.”

Meanwhile, South Bend, Indiana, Mayor Pete Buttigieg blasted Congresswoman Tulsi Gabbard for having met with the “murderous” dictator Bashar al-Assad during a trip to war-torn Syria in 2017. Gabbard replied that Buttigieg “lacks the courage” to sit down with U.S. enemies and seek common ground.

When asked what he would say in a first phone call with Russian President Vladimir Putin, entrepreneur Andrew Yang said he would tell Putin that the days of meddling in U.S. politics are over, and that his administration would see any efforts at undermining as “an act of aggression.”

There was also wide support for making addressing climate change a priority in U.S. policy.

Buttigieg and Gabbard found common ground in voicing support for reforming the U.S. agriculture industry as a key piece in combating climate change.

Gabbard said “hyper partisanship” in Washington has created gridlock that stands in the way of making progress on climate action and pledged to end subsidies for fossil fuel companies while instead investing in a green economy.

Billionaire Tom Steyer promoted himself as the candidate most focused on climate, saying he would use the power of the presidency to declare a “state of emergency on day one” in office.

To date, Biden, Warren and Sanders have consistently stood out as a leading group in national polls in the Democratic race.

Recent polls of likely voters in the states of Iowa and New Hampshire also include in that pack Buttigieg, the youngest candidate, at age 37.

Buttigieg recently surged into the lead in the early voting state of Iowa, with 25 percent of the vote, according to the latest CNN/Des Moines Register/Mediacom poll.

Those states hold special significance in the race as the first places where voters will actually make official picks in the race, starting with the Iowa caucuses on Feb. 3 and the New Hampshire primary on Feb. 11.

On the economic front, Senator Amy Klobuchar said that while Democrats need to “think big” when it comes to ideas for the country, there is an obligation to be fiscally responsible and “be honest about what we can pay for.” Klobuchar has criticized Warren for proposing many big-ticket social programs without showing how she would pay for them other than with a “wealth tax” on the richest Americans.

Harris urged a focus on problems through a modern lens and not what she called viewing those issues from the past. She cited a priority of instituting paid family leave and the trend of women having children later in lives, a time, she says, when they are more likely to also be taking care of their parents as well.

The next Democratic debate, the party’s sixth, is scheduled for Dec. 19 in Los Angeles.

Candidates face stricter requirements for earning their spot on that stage. They must earn at least 4% support in national polls or 6% in early state polls, while also receiving donations from 200,000 supporters.