The U.S. Justice Department said Tuesday it would cut the recommended seven-to-nine-year prison sentence for Roger Stone, a political confidant of President Donald Trump, in a corruption case linked to the 2016 election, acting just hours after the U.S. leader called the suggested term a "miscarriage of justice."

Top Justice Department officials stunningly rebuked their own team of prosecutors in the high-profile case.

The officials said they were taken aback by the recommendation for the lengthy term for the political trickster, who was convicted of seven charges in November, including lying to Congress and threatening a witness in his case. Stone is set to be sentenced in Washington next week.

A top Justice Department official told CNN that the country's top law enforcement agency "was shocked to see the sentencing recommendation. The department believes the recommendation is extreme and excessive and is grossly disproportionate to Stone's offenses."

Trump, in the wee hours of Tuesday, denounced the original sentencing recommendation for his longtime friend.

This is a horrible and very unfair situation. The real crimes were on the other side, as nothing happens to them. Cannot allow this miscarriage of justice! https://t.co/rHPfYX6Vbv

Stone's political skulduggery on behalf of Republican candidates dates to the 1960s. Among other offenses, he was convicted of lying to Congress about his attempts to find out about hacked Democratic emails during the election four years ago that were aimed at undermining the candidacy of Democrat Hillary Clinton, Trump's opponent.

Prosecutors said the seven-to-nine-year sentence recommended for the 67-year-old Stone was "consistent with the applicable" federal sentencing guidelines, and "would accurately reflect the seriousness of his crimes and promote respect for the law.”
Stone's lawyers are calling for probation, pointing to Stone's age and his lack of a criminal history.

Prosecutors said the recommended sentence “will send the message that tampering with a witness, obstructing justice and lying in the context of a congressional investigation on matters of critical national importance are not crimes to be taken lightly.”

They said that Stone "obstructed Congress’ investigation into Russian interference in the 2016 election, lied under oath and tampered with a witness. And when his crimes were revealed by the indictment in this case, he displayed contempt for this court and the rule of law.”

Trump gave no indication whether he might pardon Stone, but did not rule it out in a December comment, when he described the prosecutors in the case as "dirty cops" and "evil people."

Stone is one of the more colorful figures in American politics. He proudly sports a tattoo on his back of former President Richard Nixon, the only U.S. leader to ever resign, leaving office in 1974 in the midst of the Watergate political scandal just ahead of his certain impeachment in the House of Representatives. 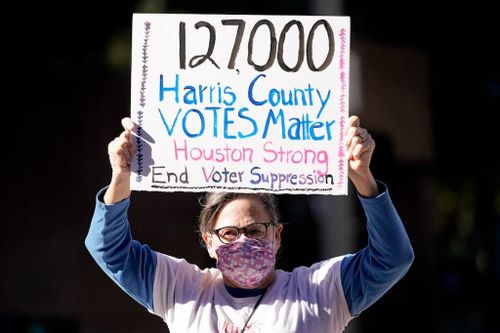