Democrats in the Texas House of Representatives boycotted a legislative session late Sunday, blocking a vote on an election reform bill critics say would make it harder for Blacks and Hispanics to vote.

With just over an hour before a midnight deadline to pass the measure, Republican members of the House said that Democrats had walked out to deny the House a quorum for a vote.

The Texas House went into recess until 10 a.m. local time on Monday - beyond the midnight Sunday deadline to pass legislation in this session.

A vote on the measure is certain to pass the Republican-dominated house. Texas Governor Greg Abbott, who strongly supports the bill, said in a late Sunday emailed statement that the bill would be added to a special legislative session planned for this fall.

Supporters of the legislation said it is needed to bolster election security. The country's second-most-populous state already has some of the most restrictive electoral laws in the United States, even without the pending bill.

The proposed bill states that the changes "are not intended to impair the right of free suffrage" but are necessary to "prevent fraud in the electoral process."

Republican U.S. Representative Michael McCaul of Texas told CNN's "State of the Union" that the intent is to "give the American people more trust in our elections."

Democrats and civil rights groups argue that such legislation disproportionately burdens or discourages voters of color, as well as the elderly and disabled.

There were no substantial allegations of fraud in Texas in last year's election and Republicans maintained their three-decade grip on all statewide offices.

So far, 14 other U.S. states have enacted 22 laws this year that make it more difficult for Americans to vote, according to a report released on Friday by the Brennan Center for Justice.

The Texas bill would strike down innovations used during last November's election because of the coronavirus pandemic.

Drive-through voting, credited with helping spark record voter turnout in Houston, will no longer be allowed. The bill also limits early hours to vote, makes it more difficult to cast absentee ballots and does away with drop boxes.

The bill would forbid voting on Sundays before 1 p.m.

Critics called that a blatant strike on the "Souls to the Polls" effort at Black churches, when worshippers have traditionally traveled in caravans to polling sites to cast votes after morning services.

The legislation would also scrap 24-hour polling sites and ban mobile units or temporary structures from being used as polling places.

The bill would also make it easier for courts to overturn elections where fraud is alleged.

New requirements would take effect as well for Texans who want to vote through the mail and election officials would be barred from sending unsolicited mail-in ballot applications to voters. The legislation would also make the removal of disruptive, partisan poll watchers more difficult.

Democratic President Joe Biden said in a statement on Saturday that the legislation in Texas "attacks the sacred right to vote."

Members of the Texas Legislative Black Caucus and the state's NAACP civil rights organization said the bill hearkened back to the Jim Crow-era, when laws were enacted to block Blacks from voting and to maintain racial segregation in the U.S. South from the late 19th century into the 1960s.

"This is a clear case of taking power and putting minorities in their place so they can never share power in Texas," Gary Bledsoe, president of the state's NAACP chapter, said ahead of the vote.

Julian Castro, secretary of housing and urban development under former President Barack Obama and a former mayor of San Antonio, told a Democratic Party news conference that the rapidly shifting demographics of Texas had Republicans "running

scared because they know that this state is changing and they're afraid of the consequences."

Hispanics are forecast by the official Texas state  demographer to surpass non-Hispanic whites as the largest group later this year.

Former Democratic Representative Beto O'Rourke, speaking during the same news conference, urged the U.S. Congress to pass expanded voting rights to stymie the vote-restriction efforts in Republican-controlled states, so that the United States would not revert to "Jim Crow 2.0." 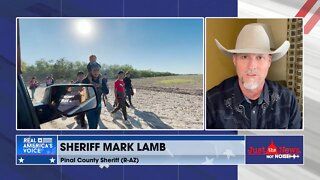 Sheriff Mark Lamb on the #BidenBorderCrisis