The House of Representatives is poised Wednesday to create a select committee to investigate the January 6 attack on the U.S. Capitol by hundreds of supporters of former President Donald Trump as lawmakers were certifying that Democrat Joe Biden had defeated him in last November's election.

The vote, formalizing creation of the committee that House Speaker Nancy Pelosi announced last week, is likely to occur almost entirely along party lines, with the slim Democratic House majority voting in favor and most Republicans against.

Under the House resolution creating the committee, it would include 13 members, eight of them appointed by Pelosi and five named by Kevin McCarthy, the House Republican minority leader, "in consultation" with Pelosi, meaning she could veto his selections. A Pelosi aide said she is considering naming a Republican among her eight selections.

But it remains unclear whether McCarthy plans to appoint any Republicans. He declined to answer questions about it on Tuesday, telling reporters, "The speaker has never talked to me about it."

The vote on the select House committee comes after the House, but not the Senate, approved creation of a bipartisan commission to investigate the attack on the Capitol, when about 800 people stormed past law enforcement officials, some of them smashing windows and doors, ransacking congressional offices and scuffling with police.

Five people were left dead from the chaos, with one protester shot dead by police. More than 500 people have been charged with an array of criminal offenses, some as minor as trespassing and others more serious, such as assaulting police or vandalizing the Capitol, which sustained $1.5 million overall in property damage.

Many of the suspects were identified by friends and relatives in scenes captured on security cameras or in videos shot by the rioters themselves and posted on social media.

Most of the criminal cases have yet to be adjudicated, although defense lawyers have been negotiating dozens of deals with federal prosecutors for their clients to plead guilty.

Trump's role in inciting the riot is expected to be a key consideration for the select committee, as well as security failures at the Capitol. At a rally near the White House an hour before the mayhem unfolded 16 blocks away at the Capitol, Trump urged supporters to "fight like hell" to block Biden's certification as winner of the Electoral College vote that determines the outcome of U.S. presidential elections. McCarthy's phone call with Trump as the riot unfolded could be explored as well.

To this day, Trump has made baseless claims that vote fraud cost him a second four-year term in the White House. He never called Biden to formally concede the election outcome and did not attend Biden's January 20 inauguration.

Now Trump is mulling whether to make another run for the presidency in 2024 and retains a wide base of support among Republican voters.

Trump has started to endorse some congressional candidates who are opposing lawmakers who either voted to impeach or convict him in connection with the January 6 attack. The House impeached him for his role in the insurrection that day, but the Senate acquitted him in February after Biden had already assumed the presidency. 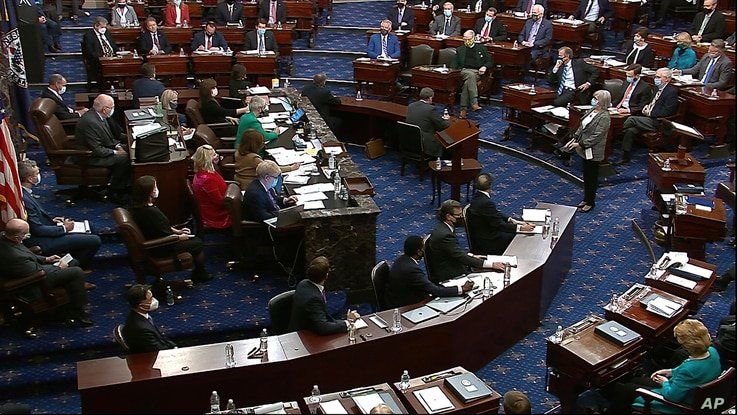 Senate Acquits Trump in His Second Impeachment Trial
Senate vote of 57-43 falls short of two-thirds majority needed to convict Trump of incitement of insurrection, after five-day trial in same building ransacked by his followers January 6

While numerous Republicans have condemned Trump's actions on January 6, others have over time downplayed the chaos, with one Republican lawmaker saying it was something akin to tourists visiting the Capitol.

Pelosi, in a note to the entire House ahead of the vote, said, "We have the duty, to the Constitution and the country, to find the truth of the January 6th insurrection and to ensure that such an assault on our democracy cannot happen again."

"It is imperative that we seek the truth of what happened," she said. "To do that, we had hoped that Congress would establish an independent, bipartisan 9/11-type commission. We were successful with a strong bipartisan vote in the House, but [Senate minority leader] Mitch McConnell asked [Republican] senators to 'do him a personal favor' and vote against the commission. Despite the support of seven Republican senators, there is no prospect for a commission at this time."

She said the select committee "will investigate and report upon the facts and causes of the attack. It will report on conclusions and recommendations for preventing any future assault. And it will find the truth."

Court overturns Cosby sex assault conviction, actor reportedly to be released from prisonNext PostTrump says Gen. Milley made up the story about yelling at him in the Situation Room