A federal grand jury has indicted a current U.S. Department of Homeland Security agent and a former agent in connection with an alleged Chinese government-sponsored scheme to stalk, harass and spy on U.S.-based Chinese critics of Beijing, the Justice Department said Thursday.

Craig Miller, a 15-year DHS employee, and Derrick Taylor, a retired DHS agent working as a private investigator, are accused of accessing and providing information about the Chinese activists from a restricted government database to two other individuals who then used the records to target the victims, according to the indictment, returned Wednesday.

Miller and Taylor were arrested in June. Each faces one count of obstruction of justice. Taylor faces an additional charge of making a false statement to the FBI in connection with the investigation.

A DHS spokesperson did not respond to a request for comment.

Three others indicted in the case – Fan “Frank” Liu, Matthew Ziburis and Qiang “Jason” Sun – allegedly carried out “the transnational repression scheme to target U.S. residents whose political views and actions are disfavored” by the Chinese government, such as advocacy for democracy in China, the Justice Department said.

The three men face multiple criminal charges, including conspiring to commit interstate harassment and criminal use of a means of identification. In addition, Liu and Ziburis are charged with acting as agents of the Chinese government without registering with the Justice Department, while Liu and Sun are charged with conspiring to bribe a federal official.

Liu and Ziburis were arrested in March. Sun, who is a Chinese citizen and allegedly orchestrated the scheme, remains at large.

“We will defend the rights of people in the United States to engage in free speech and political expression, including views the PRC [People’s Republic of China] government wants to silence,” Matthew Olsen, assistant attorney general for national security, said in a statement. “As charged, these individuals aided agents of a foreign government in seeking to suppress dissenting voices who have taken refuge here.”

The aim of the conspiracy was to “discredit” pro-democracy Chinese dissidents living in New York City, San Francisco and Indiana by spreading derogatory information about them, according to the indictment.

In one instance, Liu allegedly paid a New York-based private investigator to bribe an Internal Revenue Service agent into releasing the federal tax records of one dissident. The goal was to publicly disclose the victim's potential tax liabilities in order to discredit him. The attempt failed. The private investigator was cooperating with law enforcement and no bribe was paid.

In another case, the conspirators allegedly planned to demolish the artwork of a California-based Chinese sculptor critical of the Chinese government. The dissident artist's sculpture depicting Chinese President Xi Jinping as a "coronavirus molecule" was destroyed in the spring of 2021.

Taylor enlisted Miller and another DHS agent to obtain the information and then passed on the records to the co-conspirator.

“Liu, Ziburis and Sun used this information to target and harass the PRC dissidents, while acting on behalf of the PRC government,” according to the indictment.

Liu Pengyu, a spokesperson at the Chinese Embassy in Washington, responded by email to a VOA request for comment.

"I'm not aware of the specific situation. I would like to stress in principle that the Chinese side always asks overseas Chinese citizens to comply with the host country's laws and regulations. We firmly oppose acts by the U.S. that groundlessly malign and smear China," he said. 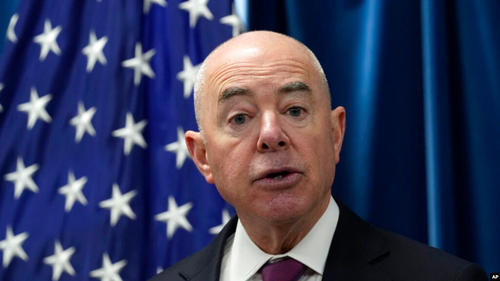